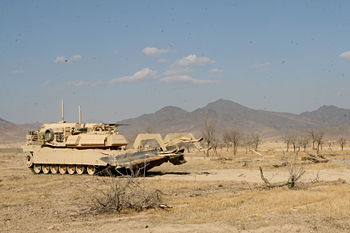 Rebuilt from M1 Abrams tank chassis, surplus to U.S. Army needs by the Army's Anniston Ammunition Depot, the Assault Breacher Vehicle (ABV) will be used by combat engineers of the U.S. Marine Corps. [1] It is similar in function to a combat engineer vehicle, the Grizzly, planned for the Army but never funded.

The ABV can be road-transported by the Heavy Equipment Transporter System. Its key role will be in breaching enemy defenses that include minefields.

Its first operational use was in the Afghanistan War (2001-) in December 2009, using line charges to clear improvised explosive devices during during Operation Cobra's Anger, in Now Zad, Afghanistan. [2]