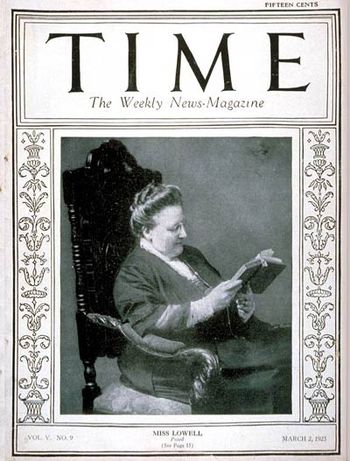 Amy Lowell on the cover of Time magazine, March 2, 1925. This issue included a favorable review of Amy Lowell's biography of John Keats.

Amy Lowell (1874-1925) was a modern American poet and an influential literary critic. She posthumously won the Pulitzer Prize for Poetry in 1926. During her lifetime, her work was largely overshadowed and overlooked by her more famous relatives, James Russell Lowell and Robert Lowell. Although she authored hundreds of poems, only a few have survived in poetry compendiums, and those works still known include Patterns and Lilacs.