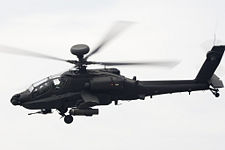 The AH-64D has major avionics upgrades, including a mast-mounted millimeter wave radar and cire-and-forget control for its Hellfire missiles. Using the Longbow radar and control system, AH-64D can engage 16 simultaneous targets with Hellfires that the guiding or additional Apaches fire. The Hellfires also can be guided by OH-64 Kiowa Warrior scout helicopters equipped with Longbow. To actually carry out an attack, the radar is unmasked for 30 seconds and then remasked, and the engagement parameters for up to 256 targets are determined.