This article is about Mercury (planet). For other uses of the term Mercury, please see Mercury (disambiguation). 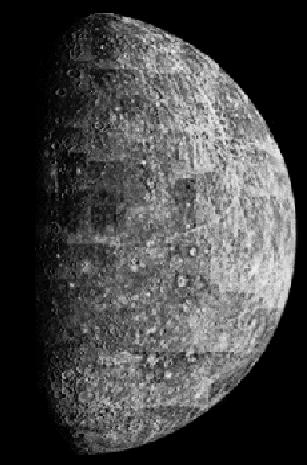 Mercury is classified as a planet by the International Astronomical Union for meeting the following criteria:[1]

Mercury has no natural satellites, and its only known geological features besides impact craters are "wrinkle ridges", probably produced by a period of contraction early in its history.[2] Mercury's almost negligible atmosphere consists of atoms blasted off its surface by the solar wind.[3] Its relatively large iron core and thin mantle have not yet been adequately explained. Hypotheses include that its outer layers were stripped off by a giant impact, and that it was prevented from fully accreting by the young Sun's energy.[4][5]

Mercury’s surface temperature fluctuates from more than 400°C to -180°C . Planetary rotation means that alternating areas are exposed to the Sun’s heat, with the result that the surface of a planet will heat and cool in alternating periods. However, while Mercury does in fact rotate about its axis, Mercury’s rotational and orbital periods are coupled, that is, nearly the same. This means that some places on Mercury’s surface receive 2.5 times more solar radiation than other areas.[6] As the planet closest to the Sun it receives the highest ratio of solar radiation. Solar radiation decreases by the inverse square law as it reaches further away from the Sun. The Moon, by comparison, which also has no atmosphere but is much further from the Sun than Mercury, reaches temperatures of only about 110°C[7]

Mercury's sidereal period is 87.97 days per year.[8] Mercury's distance from Sun is 0.31 AU at perihelion (the closest approach to the sun), 0.47 AU at aphelion (its most distant point) and it has an orbital inclination of 7.0° relative to the solar plane.[9]