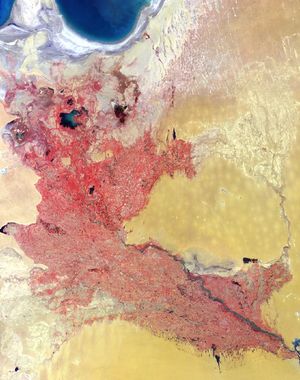 The Amu Darya River, also known as the Oxus river, is a major river of Central Asia, forming a wide delta in the western deserts of Uzbekistan and northeastern Turkmenistan. It is used extensively for irrigation, which has caused a major drop in the level of the Aral Sea. It marks borders among Afghanistan, Turkmenistan, Uzbekistan and Tajikistan.

Within the area of this image, the width of the main river is widest in the lower right-hand corner (closer to its source in the mountains of Afghanistan) and is greatly reduced by the time it reaches the edges of the dwindling Aral Sea.

During the Soviet era, large irrigation systems were developed and the region became specialized in cotton growing. Both of these landlocked countries are losing arable land to soil salinization as a result of rising groundwater levels that accompany crop irrigation. A portion of the border between western Uzbekistan and northeastern Turkmenistan follows the course of the Amu Darya river. Within the river system, about 50 fish species could be found during the 1960's; that number has dropped to approximately 20. [1]

North of the Hindu Kush mountains, lower plains stretch down to the Amu Darya. It is within these northern plains that most of Afghanistan's agriculture is based. The river is sorely in need of maintenance; erosion has already swept away 40 hectares of farm land around the village in the Kaldar district of the northern Balkh Province, but only $2 million for erosion control was available in 2006. It is navigable, and Uzbek military patrol boats, moving at high speed, are washing away the Afghan size; Afghanistan has asked Uzbekistan to reduce the damage. [2]