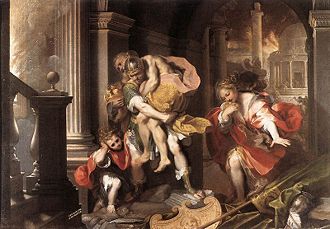 The fall of Troy has been written about extensively, including a fictional epic poem called The Aeneid by Virgil in which Aeneas carries his aged father Anchises and son Ascanius to escape the burning city; his wife Creusa didn't survive.

Troy was a city which was reportedly besieged and destroyed during the Trojan War by the Greeks. The exact dates of the war are uncertain, although it probably happened during the twelfth through fourteenth centuries BCE. The war was written about in epic poems by Homer including the Iliad and Odyssey and formed the basis of the literature of much of the culture of ancient Greece.

Troy existed physically since ruins have been discovered by archaeologists close to the seacoast in what is now the Çanakkale province in northwestern Turkey, southwest of the Dardanelles under Mount Ida. By digging down, archaeologists have discovered cities that were built on top of the ruins of previous cities. There is evidence that a city existed at the site as early as 3000 BCE, and there is archaeological evidence suggesting that there may have been nine or more distinct cities at the site. During Roman times, there was a city called Ilium founded during the reign of Augustus Caesar and which flourished until the city of Constantinople was established; afterwards, Ilium declined slowly during the Byzantine Empire. The word Trojan describes the people of Troy and their lifestyle. 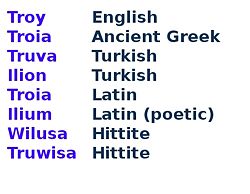 Troy has had numerous names throughout history.

In 1868 German self-taught archaeologist Heinrich Schliemann began excavating in numerous areas in a search for the city.[1][2] At the time of his investigations, it had not been known whether they city of Troy was fictional, or if it had existed, where the location of the city was. Schliemann discovered that the city was where the ancient Greeks had described it as being, but it had been buried for hundreds of years of inactivity. Excavations revealed several cities built on top of each other. One of the earlier cities, known as Troy VII, is generally identified as being the same city from Homeric Troy, although there have been disputes between archaeologists regarding this assertion. Schliemann is generally credited with having found the "real Troy". 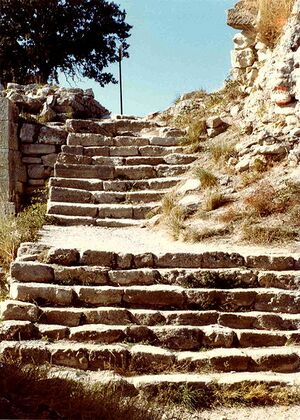 Archaelogists have discovered different cities on the site of Troy dating back to 3000 BCE.