From Citizendium
(Redirected from Train)
Jump to navigation Jump to search

This article is about the form of transport. For other uses of the term Train, please see Train (disambiguation). 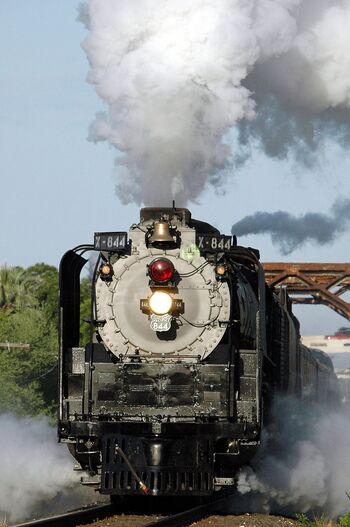 A train comprises one or more vehicles connected together and running on a track, usually for passenger travel or freight transport. The unit or vehicle powering the movement of the train is called the locomotive or sometimes engine. The usually unpowered vehicle units pulled by the locomotive are called railroad cars or train cars. Each of these units typically has a coupler at both the front and back for connecting to other such units. Trains typically run on two rails, but monorail services require only one, and maglev trains do away with track altogether. Trains most commonly run on wheels on each of the units which roll on the track or railroad. Early trains were powered by steam locomotives, but today most trains are headed by diesel locomotives or are supplied with electricity from overhead wires or other rails.