From Citizendium
(Redirected from Toronto)
Jump to navigation Jump to search 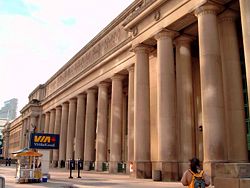 Toronto, Ontario is the most populous city in Canada, capital of the province of Ontario, and situated perhaps sixty miles northwest of Buffalo, New York as the crow files.

In 2006, Toronto had a population of 2.5 million,[1] while 5.1 million people, close to half the population of Ontario,[2] lived in the census metropolitan area.

The city is situated on the shores of Lake Ontario. Its present boundaries were established on January 1, 1998[3] when the province of Ontario amalgamated the former City of Toronto with its five nearest suburbs: Etobicoke, York, North York, East York and Scarborough.

The current city government consists of a mayor and 44 councillors.[5]

The first mayor of the newly amalgamated city was Mel Lastman,[6] the former mayor of North York. The current mayor is Rob Ford.

Toronto is the heart of a larger region known as the Greater Toronto Area (GTA).[7] In speaking about the GTA, local residents often refer to the 416 and 905 areas. These are telephone area codes. The 416 is used as colloquial shorthand for the city proper, while the 905 refers to the surrounding suburbs. These terms are also widely used by local media.

The city is the financial capital of Canada. Its financial industry is referred to as Bay Street after the former location of the Toronto Stock Exchange.

Landmarks include the CN Tower, one of the world's tallest structures, as well as its provincial legislature Queen's Park.

People have lived in the Toronto region since the retreat of the last ice age glacier 13,000 years ago. Before the arrival of the Europeans, Toronto had been the site of semi-permanent villages built by people speaking Iroquoian languages. However, in the 14th, 15th and 16th centuries the Iroquoians gradually moved north to join the Huron confederacy that was forming in the Lake Simcoe and Georgian Bay regions.[8]

French explorers and fur traders reached the Toronto region sometime in the 17th century. North of Toronto in the Georgian Bay area lived the Huron, while to the south in present-day New York lived members of the Iroquois confederacy. Warfare between these traditional enemies became more intense with the arrival of the Europeans. The 1640s and 50s saw the destruction of the Huron, allied with the French, at the hands of the Iroquois, allied with the English.[9]

After the United States won its independence, Americans loyal to the British crown began settling north of the Great Lakes in what is today southern Ontario. At the time this region was part of Quebec, which the British had taken from the French during the Seven Years War. In 1791, the British parliament passed the Constitutional Act, which divided Quebec into the two provinces of Lower and Upper Canada - forerunners of the future Canadian provinces of Quebec and Ontario.[10]

That same year John Graves Simcoe was appointed the first lieutenant-governor of Upper Canada.[11] Simcoe believed the province's capital of Newark, today's Niagara-on-the-Lake, was vulnerable to American attack. In 1793, he moved the capital to present-day Toronto where he founded the Town of York.[12] Fearing an American invasion, he began construction of Fort York at the entrance of Toronto Bay. The town itself would be built east of the fort.[13]

In 1812 the United States declared war on Great Britain and attempted an invasion of Canada. On April 1813 American troops captured York, but not before the retreating British garrison blew up the powder magazine at Fort York. During their six-day occupation, the Americans burned the Parliament Buildings and Government House. When the British captured Washington in 1814, they burned the Capitol, White House and other public buildings in retaliation.[14]

In 1832 a cholera epidemic struck York, which led to the creation of the Board of Health of York. Complaints about the authorities' handling of the crisis added to the already growing political unrest in Upper Canada.[15]

In 1834, the town of York with a population of 9,000, became the City of Toronto. William Lyon Mackenzie, a radical newspaper publisher and former member of the provincial legislature, became its first mayor. Mackenzie had been expelled from the House of Assembly by the Tory majority. Mackenzie, often described as a firebrand, is one of the more colourful figures in the city's history. In 1837, he led a poorly planned uprising against the British authorities. The rebellion, which coincided with a larger one in Lower Canada, failed and Mackenzie was forced to flee to the United States. [16]

While the winters are less arctic than many visitors believe, the downtown business district is unusual in being thoroughly interconnected by a network of tunnels, lined with shops. One can enter from mass transit or a parking lot, go to work, shop, lunch in a wide range of ethnic restaurants, and never go outdoors.

Toronto's skyline is dominated by the CN Tower, a 554.3 meters [1,815 feet and 5 inches] structure principally built for telecommunications antennas, but with an observation gallery and restaurant with spectacular views. Originally built in an area zoned for industrial use, it transformed the area when the Convention Centre and Skydome (known as the Rogers Centre since 2005) was built around it, and the 1989 SkyWalk connected it to the Union Station railway and subway station.[17]

Toronto is a thriving cultural center, although Vancouver might fight for primacy. The city is home to three universities, the University of Toronto, York University and Ryerson University. Other major cultural institutions include the Royal Ontario Museum (ROM) and the Art Gallery of Ontario (AGO).

Toronto is also a media center. It is home to four major English-language dailies: the Globe and Mail, the Toronto Star, the Toronto Sun and the National Post. Toronto's large immigrant population has given birth to a thriving ethnic press that publishes both in English and other languages. The Canadian Broadcasting Centre[18] is located in the city

There is a main theater district on King Street. Important concert venues include Roy Thomson Hall, Massey Hall and the Sony Centre of the Performing Arts (formerly the O'Keefe Centre). The city is home to the Toronto Symphony Orchestra, the Canadian Opera Company and the National Ballet of Canada. In 2006, the Four Seasons Centre for the Performing Arts, a venue especially designed for opera and ballet, opened on Queen Street near City Hall.[19] Among the city's more notable musical ensembles is the Tafelmusik Baroque Orchestra & Chamber Choir which performs with period instruments.[20]