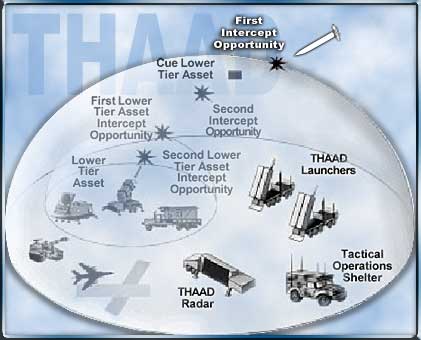 Terminal High Altitude Area Defense (THAAD) (originally named Theater High Altitude Air Defense) is a U.S. Army system for area-wide defense against theater ballistic missiles. It is intended to form the upper tier of a layered defense system, in which the MIM-104 Patriot PAC-3 missile system is the "lower tier asset" in the graphic at left.

While it protects 400km radius areas in a theater, its command, control, battle management and communications (C2BMC) is integrated with sea-based and long-range elements. Specifically, it can share tracking with Navy Burke-class destroyers and Ticonderoga-class cruisers, as well as independent radars, and long-range ground-based interceptors, according to April 2008 Congressional testimony by the director of the Missile Defense Agency, LTG Henry A. Obering III, USAF [1]

THAAD is a "hit-to-kill" missile interceptor, as does the PAC-3 missile-defense optimized Patriot. Earlier Patriot versions which used a blast-fragmentation proximity warhead, which has advantages against aircraft targets. Blast-fragmentation becomes far less effective in the absence of atmosphere, and THAAD has been described as being able to engage targets at an altitude of 150km, definitely exoatmospheric. [2]

The main THAAD ground radar is the AN/TPY-2, which is already operational in various surveillance roles, and is reported to work well. Its range is classified, but considerably greater than the THAAD missile range of 200 km.

THAAD firing units tie into a wide range of communications systems, including the Joint Tactical Information Distribution System, the obsolescent Mobile Subscriber Equipment, SINCGARS radios (to be replaced by the Joint Tactical Radio System. These are tactical systems. The AN/TPY-2 radar, like the Navy's AN/SPY-2 radar on ships with the ballistic missile defense enhancements to the AEGIS battle management system, can cooperate in acquiring targets for national ballistic missile defense. THAAD will also have access to national-level intelligence assets, including the existing Defense Support Program high-altitude missile launch detection satellites and its follow-on, and also the low-altitude constellation of Space Tracking and Surveillance System (STSS) satellites. 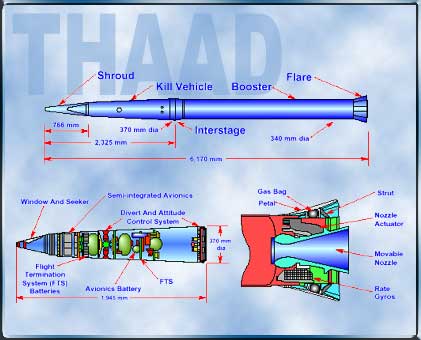 While the radar, and linkage to other systems, the missile performance has had a checkered test record. Understandably, making contact with a 370mm-diameter kill vehicle takes precise guidance. Early tests, through 2002, had flight failures, [3], but there has been more success from 2006 on.[4]

Physically, it consists of a single-stage solid rocket booster, from which the kill vehicle (KV) is detached by a separation motor. Once the KV separates, it maneuvers using a liquid-fueled divert and attitude control system, and a infrared seeker mounted on a gimbal mount.

A THAAD "fire unit" has three launchers, one AN/TPY-2, and a control center, and has 24 missiles. The first was delivered to the Air Defense Center at Fort Bliss, Texas, in May 2008.[2] LTG Obering testified that deployment of THAAD fire units will begin in 2009, with full delivery of the first two by 2011, and delivery of the next two in 2013. [5]

The system has been sold to the United Arab Emirates. [6] Japan has bought the AN/TPY-2 radar and is considering the THAAD missile. [7]