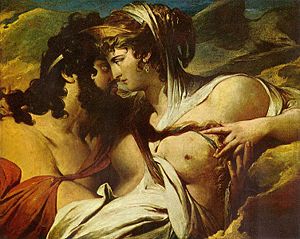 Juno and Zeus did not have a happy marriage.

Juno (Roman name) or Hera (Greek) in Greek and Roman mythology was the goddess of marriage, the daughter of Saturn. and unhappy wife (and sister) of Zeus, angry at her husband's numerous affairs with other goddesses and human women. Juno played a prominent role in literature in the Aeneid by Virgil by causing numerous troubles for the hero Aeneas. Juno was particularly angry at Trojans since some of the Trojan royalty were descended from her husband Zeus through extra-marital affairs, and it didn't help that the Trojan Paris chose her rival Aphrodite over her in a beauty contest. Juno had promised Paris control over cities, while Athena had promised him success in battle, but Aphrodite had promised Paris the "most beautiful woman in the world", namely Helen of Troy. So Juno lined up with other gods against Troy in the epic struggle lasting ten years between the Greek expeditionary force led by Agamemnon who besieged the city of Troy, as described in numerous plays and tragedies as well as epic poems such as the Iliad and Odyssey by Homer. After the city fell, Juno harried the fleeing Trojan warrior Aeneas who had numerous adventures around the Mediterranean Sea while searching to found the city of Rome. Juno sided with Carthaginian queen Dido, and later with Aeneas' rival Turnus along with the Rutulians. Juno preferred Rome's future rival city, Carthage, according to Virgil writing around the time of Augustus Caesar. But in Roman times, Juno was worshiped as the patron goddess of Rome.

Juno did not have lots of successful offspring with her marriage to Zeus, although she did have the war-god Mars who was hated by most of the other gods and goddesses. Differing accounts suggest she may have been the mother of Minerva (in the Greek version, Minerva or Athena was born from the top of Zeus' head, not from Juno.)

She conceived the fire-god Vulcan (or in Greek: Haephestus) by herself, according to one account, but Vulcan was dour, with an ill-temper, and became the god of forging, metalworking, and smithing. In Greek mythology, Juno was portrayed generally as a middle-aged woman, perhaps in her forties. Greek gods generally reached a certain age, and then stopped aging, according to Classics scholar Elizabeth Vandiver.