From Citizendium
(Redirected from Giant Panda)
Jump to: navigation, search 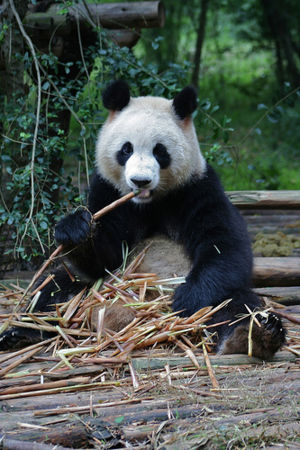 The Giant Panda (Ailuropoda melanoleuca) is a species of bear native to the mountains of south-western China. With its distinctive black and white coat, its dependency on eating large amounts of bamboo, and what appears to be an endearing cuteness in its appearance and behaviour, the Giant Panda has long been a worldwide public favourite. The animal is by no means a 'softie', however, though occasional attacks on humans have yet to dent the Panda's public image.

Some of the most interesting aspects of the Panda's physiology concern its feeding habits. Unlike some other bears, pandas do not hunt large animals; instead, they mainly eat bamboo, supplementing this with roots and occasionally smaller prey. To eat, the Panda grasps bamboo with the help of an elongated wrist bone which serves as a thumb: this adaptation of the wrist rather than its fifth digit serves as an interesting example of evolution.[1] Another evolutionary consequence of the panda's descent from a carnivorous ancestor is that its digestive system is adapted for meat rather than a herbivorous diet; as it cannot digest bamboo easily, and this food provides little nutrition, the Panda must spend a lot of time eating. As a result, the animal also does not hibernate, unlike most closely-related species.

The contrast between the Panda's habits and appearance has led to historical debates over whether it really is a bear, or should be placed with another group, such as raccoons. A similar debate occurred about the lineage of the Red Panda, which shares some characteristics of its Giant cousin, but is in fact only distantly related. Culturally, the word for 'panda' in the main Chinese language, Mandarin, is dà xióng māo (大熊猫), literally 'great bear cat'; however, this does not mean that the Chinese people believe these animals to be feline. Scientific evidence now places the Giant Panda in the Ursidae family, making it a 'true bear'. 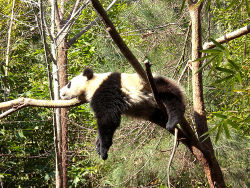 Despite programmes worldwide to protect, care for and breed pandas, the animal remains endangered. Perhaps 3000 exist in the wilds of Sichuan, Gansu and Shaanxi provinces,[2] though a 2008 earthquake destroyed about a quarter of their habitat and fragmented the animals into smaller groups that would have more difficulty surviving.[3] For some years, breeding programmes have attempted to encourage the bears to mate, with varied degrees of success. These programmes have ranged from the serious to the bizarre; for example, handlers in China have been known to administer Viagra, the drug designed to treat impotence in humans. Other attempts have involved exposing unwilling pandas to film footage of other pandas in the act of mating,[4] or placing the subject in an enclosure next to a successful pair.[5]

Evolution of the Giant Panda

In 2007, the earliest ancestor of the modern Giant Panda known to science was made public.[6] This 'pygmy bear' was much smaller than the current species, but seems to have lived in much the same way. A wearing down of the teeth, for example, points to a bamboo-based diet, as do unique features of the cranium. The team who examined this animal's remains were unable, however, to establish whether this 'miniature' specimen had similar black and white fur.[7]

This ancestor, Ailuropoda microta, was uncovered in Jinyin cave, Guangxi province in south China, and dates from the late Pliocene period of about two to 2.4 million years ago. The location of the remains indicate that ancestral pandas once ranged in the continent's tropical lowlands, whereas today only the upland regions such as Sichuan support wild pandas.