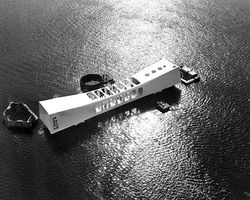 (PD) Photo: United States Navy
The USS Arizona memorial in Pearl Harbor, Hawaii which spans over the wreckage of the battleship.

On December 7, 1941, units of the Imperial Japanese Navy conducted air and submarine operations against American forces in the Battle of Pearl Harbor. This battle was a key element in the major Japanese escalation of what they call the Pacific War.

While the United States had intelligence suggesting a high probability of Japanese attacks in December 1941, and some specific information that either did not reach the Pearl Harbor commanders, Admiral Husband Kimmel (Navy) or Lieutenant General Walter Short (Army), the attack was a tactical surprise.

Few battles, and the circumstances leading to them, have been studied as extensively as this one. Many concepts of the discipline of intelligence and warning resulted from this action.

Japan opened World War Two in the Pacific with an offensive principally based on their Strike-South doctrine, seeking resources in Southeast Asia. Nevertheless, they believed they had to deter U.S. forces from intervening. Admiral Isoroku Yamamoto, Commander-in-Chief, Combined Fleet and an opponent war with the United States, insisted that the preventive attack on the fleet was necessary to protect his other operations.

Had all the forces in Hawaii been under the vigorous operational control of a single commander — most likely the Commander in Chief, Pacific Fleet — it is unlikely (though not inconceivable) that multiple alert systems would have existed side by side, that the air above the islands would not have had a single center controlling it, or that Oahu's fighter defenses would have assumed that long-range patrols would give them four hours' warning of an enemy's approach.[1]

Admiral Husband Kimmel was commander in chief of the Pacific Fleet, reporting to the Chief of Naval Operations, Admiral Harold Stark. Rear Admiral Claude Bloch, however, was head of the Fourteenth Naval District, also reporting to the CNO, with a coordinating responsibility with Kimmel. Bloch had responsibility for naval forces not part of the fleet.

Lieutenant General Walter Short commanded Army ground forces (including antiaircraft), Army Air Force units, and the experimental radar warning center. There were 12 B-17 Flying Fortress four-engine capable of long-range search, but no such searches were being conducted and there were too few for thorough coverage. B-18 bombers were modifications of a twin-engine DC-2 airliner and had a shorter-range search capability.

Various intelligence officers, such as Edwin Layton and Ellis Zacharias, strongly suspected that Pearl Harbor was a Japanese target, but were unable to turn their suspicions into useful warnings.

Short was convinced that the major threat to his aircraft was sabotage by residents of Japanese ancestry, so he had them parked in close formation for ease in guarding them against ground attack. This made them dense targets for strafing and bombing.

Implications of the Battle of Taranto

In 1940, the Royal Navy, at the Battle of Taranto, delivered a devastating night attack, by torpedo bombers, to battleships in a harbor. They used the Fairey Swordfish biplane, which looked like a relic of the First World War but could be amazingly effective.

Key leaders of U.S. Navy, in spite of knowing the details of that attack, still believed its ships were safe from aerial torpedoes in a harbor, although Taranto was as shallow as Pearl. In fairness, some were concerned, such as Kimmel's predecessor, Admiral James Richardson, saw Taranto as directly relevant. Kimmel and the Fourteenth Naval District commander, Rear Admiral Claude Bloch, however, deprecated the threat. [2] Richardson was no longer, however, in the line of command. Bloch had direct responsibility for the defenses of the harbor, as opposed to the fleet.

Contrary to some popular opinion, U.S. communications intelligence — MAGIC did not give an unambiguous prior warning of the attack. Immediately before the attack, the U.S. became aware that the Japanese were issuing orders to destroy embassy cryptographic materials, and tell the United States that negotiations had failed, although diplomatic relations were not formally broken. The 14-part message had special instructions about the delivery time, suggestive of coordination with military operations.[3]

Had the message been intercepted and its meaning known, a code phrase sent, in the clear, to the Japanese striking force did mean "attack Pearl Harbor". The phrase, "Climb Mount Nitaaka", sent on 2 December (Tokyo time) would not have been meaningful. [4]

While the overall operational commander was Admiral Yamamoto, the officer in tactical command was Vice Admiral Chuichi Nagamo. Nagamo, a battleship and gunnery specialist, commanded the Mobile Fleet due to seniority rather than special qualifications.[5] 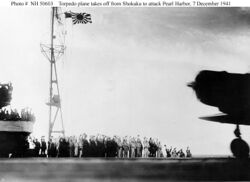 The Japanese torpedo bomber taking off to attack Pearl Harbor. 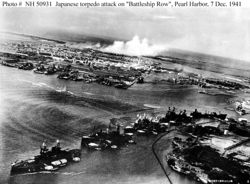 The picture, taken from a Japanese aircraft, shows USS Nevada (BB-36) with flag raised at stern; USS Arizona (BB-39) with repair ship USS Vestal (AR-4) outboard; USS Tennessee (BB-43) with USS West Virginia (BB-48) outboard; USS Maryland (BB-46) with USS Oklahoma (BB-37) outboard; and USS Neosho (AO-23) and USS California (BB-44). West Virginia, Oklahoma, and California have been torpedoed, as marked by ripples and spreading oil, and the first two are listing to port. Torpedo drop splashes and running tracks are visible at left and center. White smoke in the distance is from Hickam Field. Grey smoke in the center middle distance is from the torpedoed USS Helena (CL-50).

Arguments for and against a possible third strike 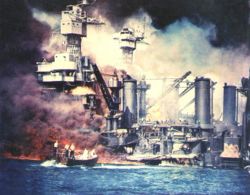 Survivors from the USS West Virginia being rescued. The Japanese attack on Pearl Harbor forced the United States into the war.