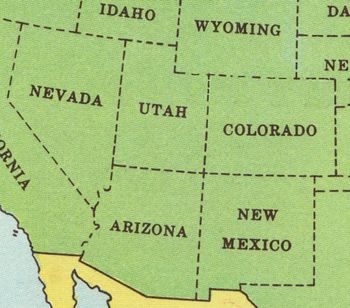 Arizona joined the United States of America as the 48th state on February 14, 1912. Its area is 114,000 square miles (295,260 square kilometers) and its estimated population is 6,500,180 (2008). Its border with Utah on the north coincides with the 37th parallel of latitude; it shares with New Mexico on the east the meridian of 109° W. The Mexican state of Sonora is to its south. The Colorado River forms the boundary with California and part of Nevada on the west.

Phoenix is the state's capital and Tucson the second largest city.