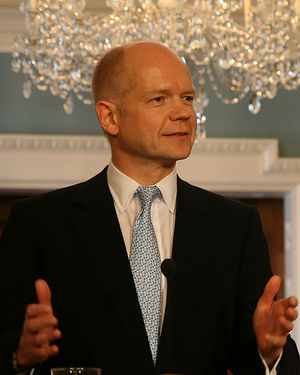 (CC) Photo: Foreign and Commonwealth Office
William Hague in 2010, shortly after becoming the UK foreign minister. He is currently the Leader of the House of Commons.

William Jefferson Hague, Baron Hague of Richmond (born 26th March 1961) is a UK politician who was leader of the Conservative Party from 1997 until 2001. He also became the Member of Parliament for Richmond after his by-election victory in 1989. Hague announced in July 2014 that he would leave the House of Commons in 2015,[1] and subsequently became a member of the House of Lords.

Hague was Leader of the House of Commons from July 2014 to May 2015, responsible for the passage of government business through the lower house of Parliament. Previously he was Foreign Secretary from May 2010, i.e. the country's foreign minister.

The Conservatives had lost by a landslide to Tony Blair's Labour Party in May 1997. In need of a new leader, they elected Hague, who had previously been the Secretary of State for Wales and was well-known for a speech at a Conservative Party conference as a teenager in the 1970s. He thus became Leader of the Opposition. Hague endured a rough ride in the press and had to contend with a public broadly unwilling to see the swift return of the Conservative Party to power. With only 164 seats in Parliament, the party struggled to make its voice heard against the overwhelming majority of the first Labour government. In the 2001 general election, Hague gained just two seats and quickly resigned; his most notable achievements were presiding over some increase in party membership and reforming the leadership election system. In 2005, following the election of David Cameron as Tory leader, Hague accepted a post as Shadow Foreign Secretary and de facto deputy leader.