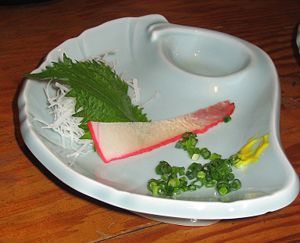 (CC) Photo: Franklin Bynum
Whale meat is considered a delicacy in Japan. Here, the meat has been sliced into a strip of 'whale bacon'.

Whale meat refers to the edible flesh of various species of whale. It can be prepared and eaten in various ways, and for example forms one part of traditional Japanese cuisine (鯨肉 gei niku 'whale meat'). Servings also appear on menus in Norway and Iceland, where whales are also hunted, and also some Aboriginal communities take whales for their meat.

In recent years, however, concerns have been raised about the levels of pollutants in samples of whale meat,[1] and many people around the world object to the hunting and eating of whales and dolphins. In turn, pro-whaling representatives have argued that eating whale meat is more environmentally friendly than consuming meat raised from cattle.[2][3]

The Japanese have hunted whales since at least the eighth century, since the practice is mentioned in the Kojiki (古事記), Japan's oldest document, dating back to that time.[4][5][6] Whale meat is considered a delicacy in Japan, and different regions prepare the meat in distinct ways; for example, in Kyushu it is served as fresh as possible, whereas northern diners prefer the meat to be flavoured through delaying freezing for a day or so after slaughter.[7] It is available from specialist shops (signed 鯨 or くじら kujira, 'whale'), or from some supermarkets, sometimes labelled 'whale bacon'. It may also be thinly sliced as sashimi (刺身).

Whale meat was common in the nation's diet until the mid-twentieth century. However, there are signs that whale meat is becoming harder to find in Japan, with many shops no longer stocking it due to falling customer demand.[8] In recent years, the government of Japan has encouraged people to eat more whale meat. School programmes have been set up to educate children on the life cycle of the meat, from the ocean to the dinner plate. Adult courses in preparing whale meat have also appeared. Total sponsorship by the government runs into millions of dollars annually.[9] 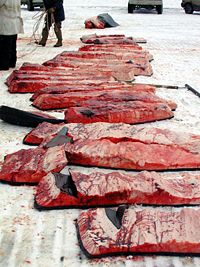 © Photo: T.L. Corbin
Meat from a Bowhead Whale, hunted and eaten by Inupiaq, Eskimos, in Barrow, Alaska. It is legal in Alaska for Inupiak to harvest some whale.

Norwegian markets supply whale meat, usually from minke whales, in cities such as Bergen. Often the meat is smoked, but fresh whale meat is also available. English signs are often placed to help buyers unfamiliar with Norwegian to identify the meat amongst other produce. Whale steaks are popular in Norway, sometimes seasoned with parsley or red and green peppers, or just salt and pepper.[10]