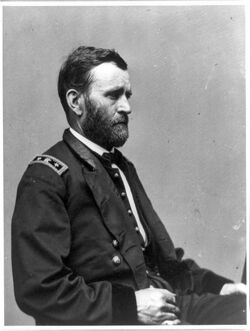 Grant was born April 27, 1822, in a two-room cabin at Point Pleasant, Ohio. His father, Jesse Root Grant, was descended from undistinguished Puritan forebears who had immigrated to Massachusetts in the early 17th century. His mother, Hannah Simpson Grant, was a typical hard-working and pious frontier woman. The elder Grant was a tanner who by hard work and native shrewdness managed to acquire a modest competence. Lacking much education himself, he was determined that his sons should have the best the community offered. From the time he was 6 until he was nearly 17, young Grant regularly attended school, first in Georgetown, Ohio, to which the family had moved soon after he was born, and later at nearby academies. While working on the family, he developed a fondness for horses almost amounting to a passion, and a liking for outdoor life that in after years stood him in good stead.

In 1839, his father obtained for him an appointment to the United States Military Academy at West Point. In making out the necessary papers, the congressman erroneously wrote his name as Ulysses Simpson Grant (Simpson was his mother's name) instead of Hiram Ulysses Grant, the name with which he had been christened. His name was so entered on the rolls of the Military Academy. Grant never liked his old initials H.U.G. and took the new mane. Except for his horsemanship Grant did not distinguish himself at West Point, which had an engineering curriculum. Graduating in 1843, twenty-first in a class of thirty-nine, he was sent to the infantry instead of to the cavalry, his choice. He served at various posts in Missouri and Louisiana, but in 1845 he was ordered to accompany General Zachary Taylor to Texas and later served in the invasion of Mexico. Subsequently he was transferred to General Winfield Scott's army in time to participate in the march on Mexico City. Grant handled logistics, and did not have a combat role, but he was twice cited for gallantry under fire. He was an unusually keen observer of terrain, battle formations, and the actions of commanders, and by happenstance was involved in most of the major battles of the war. In later years he said it was an unjust war, but he did not say that at the time.

Stationed at Jefferson Barracks, Missouri, after the Mexican War, in August 1848 he married Julia Dent, daughter of a Missouri planter and slaveowner. Four years later, now a captain, Grant was transferred to the Fort Humboldt, in far northern California; his wife could not accompany him because of the hardships of the trip. Unhappy because of the loneliness and enforced separation, Grant, still a first lieutenant, started drinking. "I do nothing here but set in my room and read and occasionally take a short ride on one of the public horses," he wrote his wife. His commander, Lt Col Col. Robert C. Buchanan Buchanan, hated him and forced him to resign.[1] The six years that followed were the most disappointing of his life. He tried farming on land in the St. Louis area owned by his wife's father. He failed at that, at selling real estate, and at clerking in a customs house. He owned one slave. In financial straits, he finally turned to his own family and became a clerk in a Galena, Illinois, leather store owned by his two brothers.

Civil War in the West

Civil War in the East

His death and funeral became an occasion for a religiously tinged emotional and political reconciliation of North and South and as such is a critical event in the history of the political culture of the United States. "I am sorry General Grant is dead," proclaimed ex-Confederate general and pallbearer Simon Bolivar Buckner, "but his death has yet been the greatest blessing the country has ever received, now, reunion is perfect."[2]

Throughout the 20th century Grant was considered one of the two or three worst presidents, because of the corruption he tolerated, his misplaced loyalty to old comrades, his disdain for good government and rejection of good advice, his Reconstruction policies that favored the Republican party at the expense of the republican principles on which the party was founded, and the economic disaster that struck the nation in the panic of 1873, making his second term a period of hardship.

In recent years Grant's reputation as president has improved somewhat. Smith (2002)[3] is typical in that it acknowledges Grant's flaws, but portrays him as a man of character and as the ultimate pragmatist, a man whose virtues and achievements far outweighed the faults and scandals often associated with his career.

Grant's military reputation stands very high indeed, except in the one area of moral judgment, whether he sacrificed thousands of lives in a meat grinder war of attrition. Smith (2002) highlights the pragmatic Grant, willing to violate the orthodoxies of military strategy as he learned what the battlefield taught and forgot what the old textbooks said. For Grant warfare was an end in itself, a kind of brutal game among rival commanders. Smith (2002) wants to challenge what he sees as a common historical image of Grant as a general whose victories may be attributed to a simple willingness to sacrifice troops in battle, but he still presents a Grant remarkably willing to sacrifice troops in a conflict he defined as, ultimately, a war of attrition.