I know this subject only second hand through the texts that are cited in the article, so I would really appreciate input from anyone who knows El Tío better than I do. Stylistic and copy editing help would also be much appreciated. --Joe Quick (Talk) 04:31, 5 July 2007 (CDT)

I’ve marked the article “developed” but it still needs work in a couple of areas:

Can someone correct the problem with the footnotes? --Martin Baldwin-Edwards 18:52, 14 September 2007 (CDT) 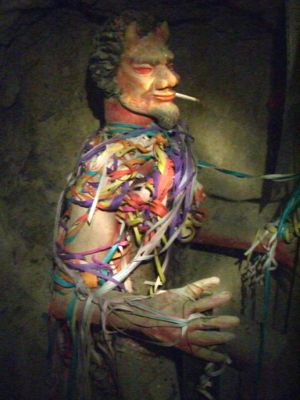 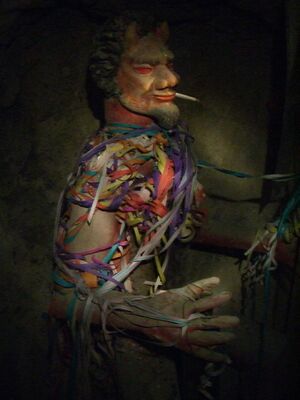 Just want to get Mr. Quick's opinion before changing the article space, seeing as he started the article. --Robert W King 02:00, 21 September 2007 (CDT)

Just do it! It is Draft of the Week, so is on public view. Also, can someone deal with the horrid footnotes, or tell me how to remove the wrong numbers? --Martin Baldwin-Edwards 04:25, 21 September 2007 (CDT)

P.S. I still don't really understand what the problem is with the footnotes. I confess that I was sloppy when I did them, but I'm not sure where I slopped. Could you point me to an example that I could follow? Thanks. --Joe Quick (Talk) 10:18, 21 September 2007 (CDT)

It is not about style: there is a technical problem which has inserted meaningless numbers at the beginning of each footnote! I dont know why...--Martin Baldwin-Edwards 10:37, 21 September 2007 (CDT)

I see, that makes me feel a little better. Do you mean the blue numbers (4.1, 4.2, etc.)? Those appear because there are multiple references to the same book. Clicking on them sends you back up to where that specific instance occurs in the text. This is actually partially a result of my sloppiness and partially a result of me not knowing the wiki standard for citations. I've cited each of the books several times but only one line appears in the citations because each instance is exactly the same (I left out page numbers even though it pained me because that seemed to be the standard). If I were to go back in and add page numbers, then each would appear individually.

I've been thinking about this recently, since we launched the subpages initiative. Since the full citations for those books will appear on the bibliography page, then would it be appropriate to cut footnotes down to something like: "Nash 1992: 106"? I have to admit that I've always used in-text citations and I remain pretty much clueless about the proper standards to follow for footnotes. --Joe Quick (Talk) 11:08, 21 September 2007 (CDT)

Well, in the Bibliography the book and journal titles should really be in italics, and I would prefer a publisher and place as well, IN the footnotes, these numbers are horrific: we have never approved such a style for CZ.--Martin Baldwin-Edwards 19:51, 21 September 2007 (CDT)

Okay. I'm used to using the style guide from the American Anthropological Association in which nothing is italicized. I don't really care though, I'm happy with whichever style you all prefer. I can add the publishing info tomorrow. I left it out only because the ISBN links people directly to sources.

I have never seen this style. I don't like it because there is potential ambiguity about what is a title. I suppose we should decide on a reference standard for CZ...yet another task.--Martin Baldwin-Edwards 05:34, 22 September 2007 (CDT)