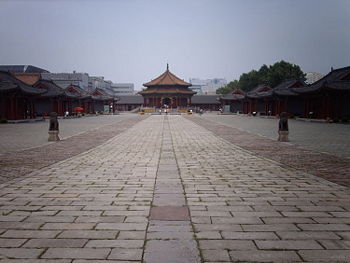 (CC) Photo: Derek Harkness
The Eastern Line of the Palace is the oldest section dating to 1625. It consists of the Dazheng Hall and ten King's Pavilions.

Shenyang Imperial Palace in the North East of China, is not as well known as the larger 'Forbidden City' Palace of Beijing. However, Shenyang's Palace is every bit Beijing's equal in beauty and historical interest. The UNESCO lists Shenyang's Imperial Palace along side Beijing's. Construction on the Palace in Shenyang started in 1625 by the command of Emperor Taizu Nuerhachi of the Late Jin dynasty who ruled the North East of modern China — an area known to history as Manchuria. When the Manchu people eventually conquered Ming dynasty China to form the Qing dynasty, and moved their capital to Beijing, they maintained the Palace in Shenyang as a second capital. The Qing Emperors would frequently visit Shenyang and stay in the Palace there while paying homage to their ancestors who's tombs lie nearby. 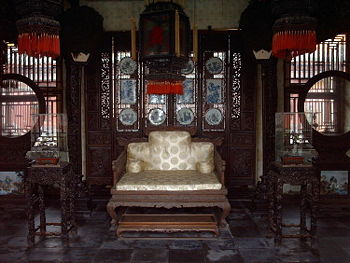 The palace is approximately square and covers an area of around 70,000 square metres. There are some 100 builds containing over 500 rooms. The palace is divided north to south into three sections. The Easter line is the oldest and displays unique Manchurian architectural styles. The Western line houses a theater and the palace library. The central line contains the main residencies of the Emperor, Empress and the Imperial Consorts. High walls surround the whole palace as well as dividing the site so that each section, courtyard or garden is secluded and private, without being overlooked by other buildings. All the entrances to the Palace, of which there are three in number, are on the southern wall. This limited public access to the Palace. While Beijing's Palace has acquired the nick name of the 'Forbidden City', access to Shenyang's Palace was under even stricter control.

The oldest section of the palace is the Eastern Line consisting of the Dazheng Hall and the Ten King's Pavilions. The Hall is a large octagonal building which contained the high throne of the Emperor. Sited at the Northern end of the line, the Hall faces down a long road which runs due south to the gate in the opposite wall. On either side of the road way are ten pavilions. These are not set in a straight line, but gently curves inwards such that the road way is wider at the South, near the gate and narrows towards the North as you approach the Emperor's hall. The two pavilions nearest the Dazheng Hall are the Emperors, known as the East King's Pavilion and the West King's Pavilion. The other eight King's Pavilions were the official offices of each of the eight Banners that made up the Manchurian nation and it's army.