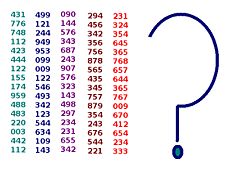 (PD) Chart: Thomas Wright Sulcer
Data, in essence, are numbers put in the context of prior knowledge or of the expectations generated by a hypothesis.

Scientific data are usually the result of testing a hypothesis or otherwise exploring some unknown territory at the borders of present scientific knowledge by means of the scientific method. In the context of prior knowledge or of the expectations generated by a hypothesis, a simple spreadsheet with numbers representing measured or calculated data may reveal a path towards curing a certain type of disease or a way to build vehicles with lower energy consumption or overall ecological footprint, or a hint on how to decipher an ancient language. Usually, the way from such an initial idea is long and has to be paved with considerable further amounts of data, some of which will point into new directions.