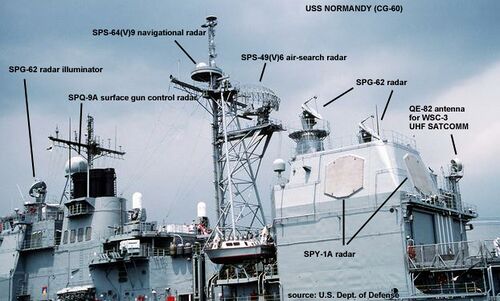 The AN/SPS-49 is a very-long-range, two-dimensional air search radar on Ticonderoga-class cruisers, but not on Burke-class destroyers, which provides earlier warning than the three-dimensional AN/SPY-1 main radar. The two radar systems feed into the AEGIS battle management system computers. The sensor data can be made available to other platforms via the Cooperative Engagement Capability to ships equipped with CEC, and to a wider range of recipients through the Joint Tactical Information Distribution System (JTIDS).

In the picture, it is the mechanically scanned antenna on the right of the center mast, below the radome of the AN-SPS-64 navigational radar. It operates in the IEEE L-band/NATO C-band, and is mounted higher than the AN/SPY-1 to give it a longer horizon.

L-band has longer range than that S-band used by the three-dimensional AN/SPY-1. The radar has a peak power of 360 kilowatts, and extensive electronic counter-countermeasures (ECCM) capabilities including frequency agility, variable pulse repetition frequency and sidelobe cancellation.