SIPRNET is the usual way to refer to the U.S. military's SECRET Internet Protocol Router Network. It is used used for passing tactical and operational information at the SECRET classification level. [1] SECRET is a medium level of security classification, and is the typical level for sensitive doctrine and procedures for regular military actions, orders for troop movement and even small to medium combat operations, after-action reports from conventional actions, resource inventories of personnel and ammunition, etc. Specifically,

SIPRNET is generally restricted to "collateral" SECRET information, which does not have additional access restrictions. It may carry SECRET information with the restriction of NO FOREIGN NATIONALS (NOFORN), especially for Australia, Canada, and the United Kingdom, to which NOFORN does not automatically apply. Access restrictions include such things as material specific to nuclear weapons, the details of some common intelligence systems, etc. Orders for major operations, the operational details and product of more exotic intelligence systems, etc., have to go on a network approved for more sensitive traffic, such as JWICS. SIPRNET, however, can handle the bulk of classified information used by conventional military units.

There is no such thing as a SIPRNET computer or terminal. SIPRNET is a network, and its users typically connect their computers to a local area network, which, through one or more routers and appropriate security equipment, connect the worldwide secure network. This puts a good deal of responsibility on the user organizations to restrict physical access to LANs that interconnect with SIPRNET.

STU-III and STE secure telephones can be given NSA-approved SIPRNET keys, which allow secure dialup connections to SIPRNET. The user connects a computer to the secure telephone, which dials into a SIPRNET access server and the secure phone negotiate an encrypted connection that meets SIPRNET standards -- or will drop the connection. The phones themselves, when apart from their keys, are considered sensitive, but not classified. This was a deliberate design decision.

Superseding STU and STE phones, nowadays plain Voice Over IP phones (such as a Cisco 7960) can be connected to SIPRNET and used just like "normal" VoIP phones.

SIPRNET replaced the earlier, DSNET1 as the SECRET portion of the Defense Information Systems Network. At the time of DISN, it carried three major networks, each with completely separate connectivity. The multiple DSNET networks were a return to reality after a too-early attempt to share networks with classified data of all levels. In one respect, that was accomplished with an encryption device called BLACKER, which went through formal software verification to prove it really could separate the different levels. Unfortunately, a single BLACKER, which could handle a single 64Kbps data stream, cost as much or more than three encryption devices that could handle 1.5 Mbps each.

SIPRNET began with 512 Kbps backbone links, moved to 1.544, and was scheduled to move up to 44.736 Mbps links. With improvements in communications technology, it may well be cheaper to get far faster links than the T3 for less cost.

Four Department of Defense agencies have joint responsibility for SIPRNET:

Among their responsibilities, delegated to people on the Defense Information Systems Network Security Accreditation Working Group decide "who can connect when, where and how."[1] 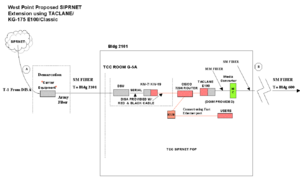 From the router and other equipment that connects a location to the SIPRNET POP, the most common means of equipment is to connect the central base equipment to secure local area networks (LAN) on the campus. These LANs may themselves be encrypted, with each computer having its own encryption/decryption device, or the LANs may run through protected distribution systems, which are judged to have sufficient physical protection that an adversary could not install a physical tap. 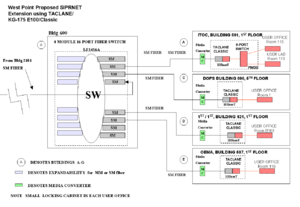 In tactical environments, the AN/VRC-106(V)1 (C) secure wireless radio has been used to expand its presence, sending it out from a M1130 command vehicle to the other Tactical Operations Center vehicles of a Stryker Brigade Combat Team headquarters. The same radio and Secure Wireless Land Area Network is used among the shelters or vehicles of a Network Operations Center, as with the Warfighter Information Network-Tactical.

Even though there are no special SIPRNET computers, there are authorized users. Every person with SIPRNET access must be approved by his or her chain of command, receive a user identifier, and have a strong password that is changed at least every 150 days. Think of a computer currently logged in to SIPRNET as being like an unlocked safe with its drawers open; the user must not leave the logged-in computer. Even the United States Navy, which runs on coffee, requires its users to log out before going to refill their coffee cups, and then log back in while sipping coffee.

Apropos of coffee, wireless LAN connectivity such as offered by an Internet cafe is rarely if ever available, since access is harder to control. If it were approved, it would have to be in a building in which everyone is cleared to at least the SECRET level, and a sufficient guarded perimeter maintained around the building so it is technically impossible to log in from "outside the fence". Alternatively, there are approved products that provide an encrypted link between the end user and the wireless LAN router that connects to the local SIPRNET routing equipment. [2]

While there are no SIPRNET-specific computers, there are rules covering computer use. All computers that have non-removable disk drives, which connect to SIPRNET, must be kept permanently in an area approved for having SECRET information in the open, such as a command post. A laptop with a hard drive, however, can be protected, when not in use, by locking it in a safe approved for SECRET material.

The more common practice is to keep all classified material on a removable storage unit, and only lock up the classified drive. Regular military precautions for using classified material, however, also require that the computer's random access memory must be erased, even with the removable disk disconnected, before the computer can leave a protected area. There is particular concern with regard to "thumb drives" and other small removable storage that a user inadvertently might take out of the protected area.

A particularly annoying real-world security violation, reported in the Afghanistan, takes place when a person having access to a SIPRNET-connected computer plugs an iPod or other personal electronic device into the USB port. While that individual may only have intended to use the USB port for recharging, the effect of connecting to it is to allow an unauthorized device to have access to classified data. The personal device is usually confiscated in such a circumstance.

The large number of documents released by Wikileaks were provided by a person or persons with SIPRNET access. All of those viewed are marked with the label SIPDIS (SIPRNET Distribution).[3] As a result, Secretary of State Hillary Clinton has ordered the Department of State to disconnect from SIPRNET until greater security is implemented. [4]