Philomath (pronounced fill-O-muth) is a small town in the state of Oregon in the United States of America with an estimated 2008 population of 4530. Its nickname is the "The City of Volunteers." The town is located in the west central region of the state on the landward side of the Coast Mountain Range and near the Mary's river. Philomath has a long history of commercial logging dating back to the late 1800s, but was founded by members of the United Brethren Church as the site of Philomath College (the name of the town is from the Greek meaning love of learning). It is currently home to two remaining saw mills and one timber distribution center, but also wineries (e.g., Spindrift Cellars, Pheasant Court), an organic farm (Gathering Together), a biochemical company (Gene Tools, LLC), an underwater instrumentation company (Wet Labs), and many other small businesses. Philomath is a growing bedroom community for those working in nearby Corvallis at Oregon State University and Hewlett-Packard. The town is also known for its Philomath Frolic and Rodeo, held annually during the second week of July, recognized as one of the best rodeos in the Pacific Northwest. 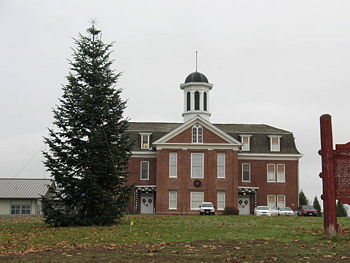 PD Image
Benton County Historical Museum in Philomath, Oregon, a major landmark in the center of town, with its new Christmas tree (donated in 2007 by Starker Forests). It is a Philomath tradition to have one of the large trees in town adorned with Christmas lights every year.

Philomath is the subject of the independent film, Clear Cut: The Story of Philomath, a documentary that was shown at the Sundance Film Festival in 2006. Written and directed by a former student of Philomath High, the film tells the story of a "culture war" between those representing longstanding, traditional logging interests and the "new urban immigrants" made up mostly of white-collar professionals.