Oxytocin (Greek: "quick birth") is a mammalian hormone that is secreted into the bloodstream from the posterior pituitary gland, and that is also released into the brain, where it has effects on social behaviors. In pregnant women, it is secreted into the blood during labor in response to distention of the cervix and it stimulates contractions of the uterus to facilitate birth. During lactation, oxytocin is secreted in response to stimulation of the nipples by the sucking of the infant, and it stimulates milk let-down in the mammary gland. Oxytocin is also secreted during orgasm in both sexes; in men it facilitates movement of sperm. In the brain, it is involved in social recognition, bonding, sexual arousal, reproductive behaviors and appetite regulation. In some species, including rats, oxytocin also promotes sodium excretion (natriuresis) and inhibits sodium appetite.[1][2][3] [4] 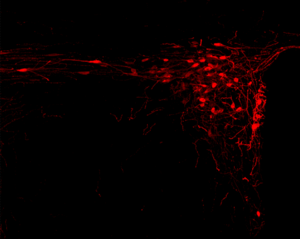 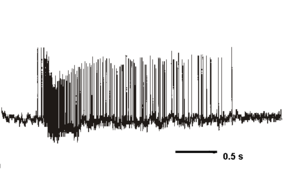 Oxytocin is secreted into the blood in very large pulses during labor, and at this time the uterus is highly sensitive to its actions as the result of a dramatic increase in the expression of oxytocin receptors in both the myometrium (the muscles of the uterus) and endometrium towards the end of pregnancy. The actions of oxytocin on the myometrium directly induce uterine contractions; the actions on the endometrium result in the production of prostaglandins, which also act on the myometrium to stimulate uterine contractions. Oxytocin release during breastfeeding causes mild but often painful uterine contractions during the first few weeks of lactation. This also helps in stopping bleeding from the point at which the placenta was attached after birth. However, in knockout mice lacking oxytocin and in mice lacking the oxytocin receptor, reproductive behavior and parturition are apparently normal, indicating that other physiological mechanisms can compensate for its absence in these functions. However, in these mice there is no milk let-down in response to suckling, so oxytocin is essential for this reflex.