The Ottoman Empire controlled much of the Middle East from the 15th century to 1923. 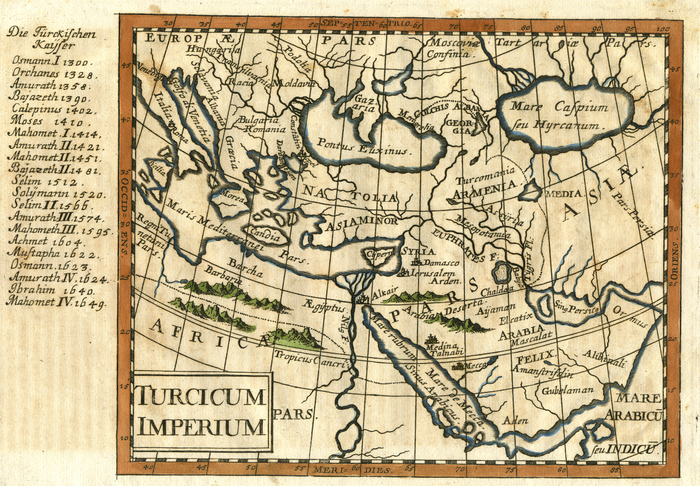 The first Ottoman Sultan, Osman I, after whom the dynasty and empire are named, declared himself independent of the Seljuq Sultanate in 1299. At what point in its expansion the sultanate starts to count as an empire is ultimately a matter of arbitrary convention. Sultan Mehmet (Muhammad) II is known as Mehmet the conqueror because in his brief reign he captured Constantinople (29 May 1453), the capital of the Byzantine or East Roman Empire. He adopted the title Qeyser-i-Rum, Roman Emperor.

In 1517 the Empire conquered the holy cities of Mecca and Medina, and also Cairo, the seat of the widely recognized Abbasid Caliphs after Baghdad fell to the Mongols in 1258. The Sultans' claim to the title of Caliph came to be generally recognized. It was in this capacity that the Sultan declared a jihad against the Allies in 1914.

The Empire was largely administered by some of the Sultan's slaves, who were thus far more powerful and wealthy than most free people.

The right of succession to the throne belonged (and still belongs in the eyes of monarchists) to the oldest male member of the House of Osman. After the traditional practice of executing possible claimants was discontinued, this meant that the Sultan would usually be succeeded by a brother, uncle or cousin rather than his own son.

The elite force of the Turkish military were the Janissaries, who were recruited by stealing very young boys from Christian families and bringing them up as fanatical Muslims.

The remaining territories outside what is now Turkey were stripped away after the First World War. The last Sultan was deposed in 1922.