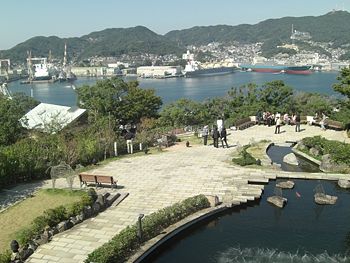 Nagasaki (長崎市 Nagasaki-shi) is the capital city of Nagasaki prefecture on the Japanese island of Kyushu. It is one of the country's westernmost cities, surrounded by harbours and a range of mountains. Throughout the city the visitor finds gardens, temples and monuments to the dead - the victims of the notorious atomic bombing of Nagasaki in 1945, graves of many foreigners who lived and died at this historic gateway to Japan, and Christians who were martyred there. 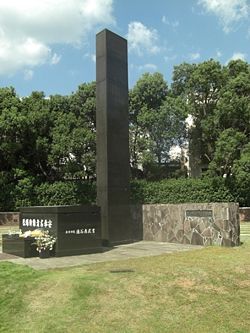 The area directly under the 1945 atomic bomb is now a peaceful park; this monument to the dead marks the exact position of the explosion above the city.

Nagasaki is in some ways a very international city, and not just because of visitors from around the world who tour the city Peace Park (平和公園 Heiwa Kooen) and the area known for the epicentre of the 1945 bomb that killed over 70,000 people.[1] For centuries, this was the only official route into Japan for foreign traders; a Dutch community, under curfew, was allowed to stay here during Japan's centuries of self-imposed isolation that ended around the time of the Meiji Era (明治時代 Meiji-jidai) in 1868. Similarly, Nagasaki has a strong Chinese community, some of whom maintain the Confucius shrine of Koshi-byo (孔子廟 Kooshi-byoo); and this city is also where most of Japan's Christian minority reside, numbering about 1% of the population nationwide.[2] 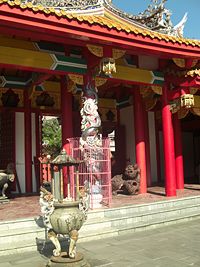 Nagasaki's Koshi-byo is a little piece of China in Japan.
Retrieved from "http://en.citizendium.org/wiki?title=Nagasaki_(city)&oldid=100581597"
Categories:
Hidden category: