Merrill's Marauders was the common nickname for GALAHAD, or the U.S. Army 5307th Provisional Unit, of 3000 men that operated in Burma, in the China-Burma-India theater (CBI) of World War II in 1944. Although much glamorized in the media, it was destroyed in the process of achieving its main objective, the capture of the city of Myitkyina, Burma, in August 1944.

Gen. Joseph Warren Stilwell proposed in 1943 to retake north Burma and reopen the land route to China (see Burma Road and Ledo Road). To augment his Chinese divisions, Stilwell's wanted 30,000 American troops but was given only a three-battalion, or 3,000-man, all-volunteer force. Coded GALAHAD, numbered the 5307th Provisional Unit, and nicknamed "Merrill's Marauders" by the press after the field commander, Gen. Frank D. Merrill, the three battalions were each broken down into two 472-man combat teams (the remainder of the men had noncombat duties), plus pack animals. 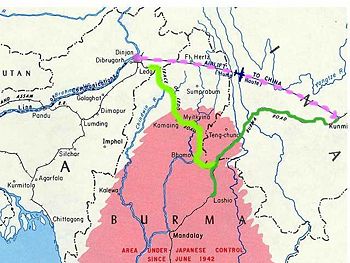 The Marauders borrowed their jungle warfare tactics from British Brigadier O. C. Wingate, who designed a "Chindits" guerrilla operation in Burma before his death in March 1944. GALAHAD's strength lay in its tactical mobility, in its potential to hit Japanese flanks and rear areas, and in its unique air supply. The Marauders were to spearhead short envelopments while Stilwell's main Chinese columns pushed back the enemy's front.

The first and only mission was to secure the route of the Burma Road, from its junction with the still unfinished Ledo road north to China. 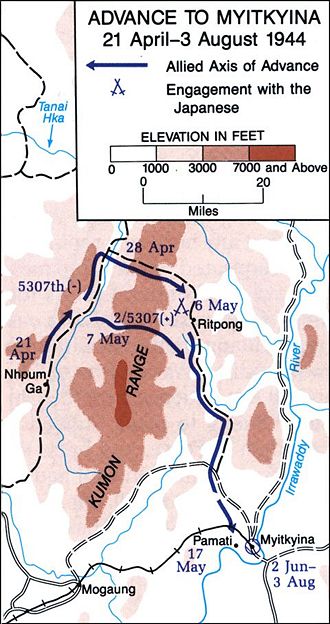 Entering combat Feb. 24, 1944, GALAHAD made sharp attacks down the Hukawng Valley and by Mar. 29 entered the Mogaung Valley, gateway to the Irrawaddy River and its rail system. Stilwell's goal was the river town of Myitkyina from which a good road led to the critical Burma Road junction at Wanting, China. Conditions were extremely harsh and demoralizing. Hundreds of very sick men were flown out, the rest soldiered on. Reduced to 1,400 men, the unit was now under the command of Colonel C. N. Hunter, who replaced the ill Merrill. The Marauders, along with two Chinese regiments, struck directly at Myitkyina through a 6,100-foot pass in the Kumon Range, surprising the 700-man Japanese garrison at Myitkyina's strategic airfield on May 17. The Americans had the vital airfield, but the Chinese captured then lost the city. Quickly the Japanese brought 4,000 men to hold the city of Myitkyina. Both sides were isolated but the Allies had air supply. Disease ruined the American, Chinese and Japanese forces. By 30 May, the 2d Battalion, which had started with 27 officers and 537 men, had only 12 men left in action. The situation in the 3d Battalion was about as bad. The 1st Battalion still had a handful of officers and 200 men. Stilwell admitted to his diary, "Galahad is just shot." By June 4 GALAHAD's strength was spent: 123 were dead, 293 wounded, 8 missing, 1,970 sick. Grievances that had mounted during a five-month, 500-mile campaign broke out dramatically at Myitkyina as morale plunged. Stilwell could not remove the unit because it was the only American ground unit in action in the theater, and withdrawal would be a political setback for the Allies. Instead he sent in new units to attack the city of Myitkyina. The Japanese were in even worse shape than the Americans and Chinese, and they pulled out on August 4, 1944.

The costs were high: the Americans lost 272 killed, 955 wounded, 980 sick; the Chinese lost 972 killed, 3,184 wounded, 188 sick. The Japanese lost 187 captured, and about 4000 dead, while about 600 escaped. The GALAHAD unit was disbanded and its tactics discarded; the survivors received many awards for valor. Stilwell came under heavy criticism for his very heavy losses, but he did achieve the objective of opening the Ledo-Burma Road route to heavy truck traffic, which began in January, 1945.