The McNary-Haugen Bill, which never became law, was a highly controversial plan in the 1920s to subsidize American agriculture by raising the domestic prices of farm products. At the end of 1920, millions of farmers were deeply in debt as prices fell and the value of their lands fell bellow their mortgage levels. The cause was the collapse of land prices after the wartime bubble when farmers used high prices to buy up neighboring farms at high prices, saddling them with heavy debts. Farmers, however, blamed the decline of foreign markets, and the effects of the protective tariff. They demanded relief as the agricultural depression grew steadily worse in the middle 1920s, while the rest of the economy flourished.

A plan suggested by George N. Peek and Hugh S. Johnson of the Moline Plow Company called for new tariffs to protect farmers from foreign producers and a federal program for price supports. Secretary of Agriculture Henry C. Wallace and Henry C. Taylor, head of the Bureau of Agricultural Economics, rallied behind the plan which formed the basis for the bill introduced by Senator McNary of Oregon and Congressman Haugen of Iowa, both Republicans. The basic idea of the McNary-Haugen plan was an equalization-fee. The government was to segregate the amounts required for domestic consumption from the exportable surplus. The former were to be sold at the higher domestic price (world price plus the tariff), using the full advantage of the tariff rates on export-able farm products, and the latter at the world price. The difference between the higher domestic price and the world price received for the surplus was to be met by the farmers of each commodity in the form of a tax or equalization fee, which would be paid by American consumers in the form of higher food prices. The legislation was before Congress from 1924 to 1928. It received powerful and united support from agricultural interests in 1927 and in 1928, respectively, when it passed both houses. Gleason (1958) shows that most leading businessmen opposed the McNary-Haugen plan on the grounds that it was contrary to economic law, would cost money and would involve the government in business. Farmers were urged to reduce production, practice crop diversification, and support the cooperative movement. The plan was also opposed on the moral ground that it destroyed the farmer's self-reliance. President Calvin Coolidge listened to business and killed the bill twice with vigorous vetoes. 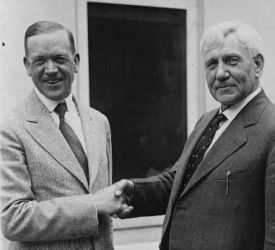 Coolidge instead supported the alternative program of Commerce Secretary Herbert Hoover and Agriculture Secretary William M. Jardine to modernize farming, by bringing in more electricity, more efficient equipment, better seeds and breeds, more rural education, and better business practices. Hoover advocated the creation of a Federal Farm Board which was dedicated to restriction of crop production to domestic demand, behind a tariff wall, and maintained that the farmer's ailments were due to defective distribution. Coolidge finally committed himself to a farm board plan for price stabilization through cooperative marketing associations, rejecting the McNary-Haugen plan that was so popular in Congress. In 1929, the Hoover plan was adopted. As president of Kansas State Agricultural College from 1918, Jardine developed a free-market program of education and cooperative marketing for Kansas farmers. His advice was increasingly sought in Washington, and led in 1922 to the formation of the Bureau of Agricultural Economics, meant to assist farm cooperatives. As secretary of agriculture after 1925 (after the death of the senior Wallace), Jardine made proposals that offered relief for farmers while preserving a free market; these passed into law as President Herbert Hoover's Agricultural Marketing Act of 1929, too far into the worsening farm crisis to succeed with the onset of the Great Depression.[1]

Henry Agard Wallace son of Agriculture Secretary Henry C, Wallace, was furious over Coolidge's vetoes of the McNary-Haugen Bill and supported Alfred E. Smith against Hoover for the presidency in 1928. He was pleased by enactment of the Agricultural Marketing Act in the Hoover administration, but cited its lack of provisions for checking overproduction, and he wrote hard-hitting editorials against the Hawley-Smoot Tariff, which passed in 1930. Wallace established himself as the preeminent Farm Belt leader, wrote the major farm speech of the Franklin D. Roosevelt presidential campaign, and in 1933 became Secretary of Agriculture in his father's footsteps.

Porter (2000) follows the growth of activity among the Iowa Farm Bureau Federation (IFBF) membership and leadership on behalf of the legislation. IFBF was the first farm organization to endorse the McNary-Haugen plan; it also supported other groups working toward the plan's passage and paid the costs of sending their president, Charles E. Hearst, to Washington on extended lobbying trips. Though the legislation ultimately failed, twice in Congress and twice by presidential veto, the adoption of the idea by mainstream farm organizations laid the groundwork for farmer support of New Deal farm policy, where they applauded Roosevelt's appointment of Peek and Johnson, authors of the McNary-Haugen plan, as well as advocate Henry A. Wallace to powerful positions where they began large-scale subsidy programs.