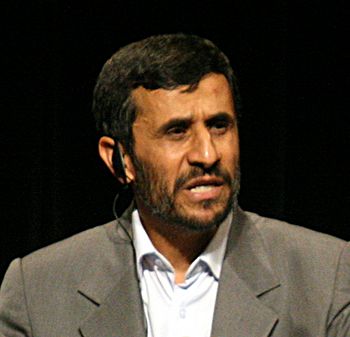 Mahmoud Ahmadinejad[1] (born 28 October 1956) was President of Iran from 6 August 2005. His previous position was Mayor of the capital of Iran, Tehran. Throughout his career he has developed a reputation both inside and outside his country as a 'hard line' Islamist for reversing reformist legislation, pursuing a civilian nuclear power programme, supporting groups unfriendly to the West, and allegedly calling for the dissolution of the state of Israel.[2]

Ahmadinejad has promoted a vision of Iran as a major Middle Eastern power, is strongly supportive of the Shia majority in neighbouring Iraq, and is opposed to the presence of American and other forces in the region. He has consistently denied that Iran is developing nuclear weapons, and insists that Iran is within its legal rights under the IAEA Treaty to acquire non-military nuclear technology.

Visit to the United States

Ahmadinejad's willingness to present deeply controversial opinions and debate with his opponents in relatively open international forums contrasts sharply with the approach of many world leaders; he even has a blog where a range of comments are published, though his government continues to restrict the Internet within Iran.[3] In September 2007, he was a guest speaker at Columbia University in the United States; this occasioned much debate in the US about the propriety of inviting him to speak at an important university, versus a right to free speech and open discourse. The President of the university, Lee Bollinger, opened the event by giving a lengthy introductory speech, in which he attacked Ahmadinejad directly. Ahmadinejad's own speech covered much ground, yet elicited relatively little reaction from the audience. In the question and answer session that followed, the audience's concerns became clear. Selected questions "from staff and students" were read for Ahmadinejad to respond to. In his responses, Ahmadinejad did not defend positions frequently imputed to him--in particular, those concerning Israel.