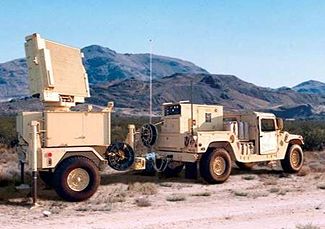 Operated by the U.S. Army and U.S. Marine Corps, the AN/MPQ-64 Sentinel is an air defense search radar, and is capable of detecting cruise missiles, helicopters, and unmanned aerial vehicles (UAV) as well as fixed-wing threats. Made by Raytheon, it is HMMWV-towed or lifted by helicopter, and can be set up in 15 minutes and made ready for movement in 5 minutes. [1] It routinely provides warning to FIM-92 Stinger and MIM-104 Patriot surface-to-air missile units.

From the electronic standpoint, it is a pulse-doppler system operating in the X-band. While phased array radars frequently do not rotate or elevate, the MPQ-84's antenna does move on its mount, giving it the capability of not only covering 360 degrees of azimuth, but targets with a relative elevation of –10º to +55º, with a 75 km range. The same antenna is used on the AN/TPQ-36(V)7 miniaturized counterartillery radar, and the two systems have a number of interchangeable components.

This geometry lets it detect targets below the coverage of air control traffic radar.[2]

Army ADA soldiers are being reassigned to the brigade combat team, unit of employment, and aviation brigade headquarters to restore the air situational awareness that had been provided by divisional ADA battalions. They are creating Air Defense Airspace Management (ADAM) cells that network with other radars and C3I-ISR systems.[3] Among these systems are the Army Forward Area Air Defense (FAAD) Command and Control system, which interconnects missile launchers, ground and airborne radar (including the E-3 Sentry) and command centers, using communications mechanisms including the Joint Tactical Information Distribution System [4]

Besides being deployed worldwide with Army and Marine troops, AN/MPQ-64s protected the 1996 Summer Olympic Games in Atlanta, Georgia and the 2002 Winter Games in Salt Lake City, Utah. In Atlanta alone, from strategic locations around the Olympic event venues and Village, the Sentinels detected more than 40 airspace violations.[2]

In air defense artillery service, it can provide cueing for FIM-92 Stinger surface-to-air missiles on Avenger or Linebacker vehicles, as well as the ground-launched SLAMRAAM derivative of the AIM-120 Advanced Medium Range Air-to-Air Missile. The SLAMRAAM uses a modified MIM-23 HAWK launcher, and the MPQ-64 can guide a modified Hawk.