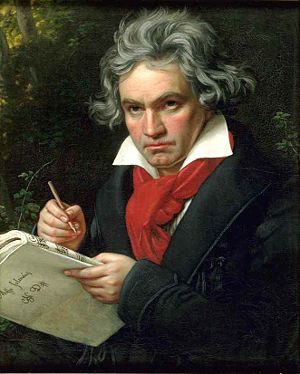 Ludwig van Beethoven (17 December 1770 – 26 March 1827) was a German composer, widely regarded as one of the greatest creators in Western music. Many of his works were written after he became deaf and was suffering from severe tinnitus.

A virtuoso pianist, he produced five piano concertos and many sonatas, as well as nine symphonies and an opera, Fidelio, taking music from the Classical to the Romantic period, and in the process greatly expanding its vocabulary. Much of his later music, especially the string quartets which were his last compositions, proved hard to understand or perform; these were rarely heard until the twentieth century, but are now regarded, along with many of his other compositions, as masterpieces. 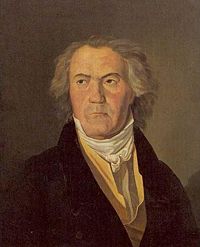 A painting of Ludwig van Beethoven made in 1823, the city of Vienna, Austria by Ferdinand Georg Waldmüller
Retrieved from "http://en.citizendium.org/wiki?title=Ludwig_van_Beethoven&oldid=100821637"
Categories:
Hidden category: