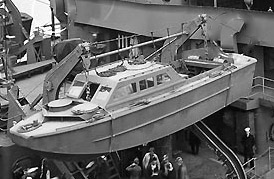 During the 1930s Higgins Industries had developed a workboat, dubbed the 'Eureka' model, designed to work in the swamps and marshes of south Louisiana. The shallow-draft boat could operate in only eighteen inches (45 cm) of water, running through vegetation and over logs and debris without fouling its propeller. It could also run right up on shore and extract itself without damage. As part of his sales demonstrations, Higgins often had the boats run up on the Lake Ponchartrain seawall.

The "headlog" - a solid block of pine at the bow - was the strongest part of the boat, enabling it to run at full speed over floating obstacles, sandbars, and right up on to the beach without damaging the hull.

A deep vee hull forward led to a reverse-curve section amidships and two flat planing sections aft, flanking a semi-tunnel that protected the propeller and shaft. Aerated water flowing under the forefoot of the boat created less friction when the boat was moving and allowed for faster speeds and maneuverability. Because of the reverse curve, objects in the water would be pushed away from the boat at a point between the bow and amidships (including the aerated water—only solid water reached the propeller). This allowed continuous high-speed running and cut down on damage to the propeller, as floating objects seldom came near it. The flat sections aft, on either side of the shaft tunnel, actually had a catamaran/planing effect which added to the hull speed.

All of these features contributed to the boat's successful adaptation as a landing craft. The Navy named it the LCPL, or Landing Craft, Personnel, Large. Some were converted to close-in fire support vessels using cannon or unguided rockets.