Lactobacillus rhamnosus GG (LGG) was isolated in 1983 from a healthy human and was indicated to be a strain of Lactobacillus rhamnosus by Sherwood Gorbach and Barry Goldin. The "GG" is attributed to the scientists who made this discovery.[1] L.rhamnosus GG is a probiotic bacteria known for its beneficial effects on the intestinal tract and can also boost a person's immune system and fight against intestinal pathogens. This helpful bacterium is said to balance the microfauna of the gastrointestinal tract. LGG is a unique bacteria because unlike other many other probiotic bacteria which die before reaching the intestine, LGG can survive in highly acidic environments like the stomach and therefore can make it to the intestine. Therefore, Gorbach and Goldin chose LGG as the ideal probiotic after testing thousands of strains for "health promoting" characteristics. [2] It can be taken in orally and then it attaches itself to the gastrointestinal membrane.[3] LGG stimulates antibody production, enhances phagocytosis (a process in which a macrophage cell engulfs foreign invaders), and modifies production of cytokines which are important proteins in the immune response. LGG is also known to decrease the proliferation of carcinogenic elements by other bacteria living in the intestine. [4] In addition, in 2005 LGG was used to treat gastrointestinal carriage of vancomycin-resistant enterococci in patients with kidney problems.[5] L. rhamnosus GG has shown to shorten the duration of rotavirus diarrhea (Guandalini et. al 2000), relieve inflammatory bowel disease (Gupta et. al 2000), and treat and prevent allergies. (Kalliomaki et al. 2001b) LGG can suppress bacterial enzyme activity, while eliminating certain components of the normal intestinal flora which in turn is beneficial to the person. It also produces an antimicrobial substance active against a number of different bacteria that are harmful to humans such as Escherichia coli, Salmonella spp., Clostridium spp., Streptococcus spp., and Bacteroides spp.[6] Since it has so many positive effects on the human body, it is now available to buy in dairy products or in form of capsules to ingest orally.

The genomic sequence of L. rhamnosus GG consists of over three million nucleotides which make up approximately 3100 genes. Compared to other lactic acid bacteria, this genome is somewhat larger, allowing LGG to propagate a greater diversity of qualities which can be the reason it can induce a larger variety of qualities when compared to other probiotic bacteria. Like most other bacteria, LGG has a double stranded circular DNA.[7]

LGG can survive acidic environments and bile digestion and has been shown to reside in the human gastrointestinal tracts.[9]. On rare occasion, LGG has been found in the sexual reproductive system of women. However, LGG should not be considered to help against urinary tract infections because LGG does not attach efficiently to the vaginal epithelium.[10] Recent studies also indicate that LGG can be found in the oral cavity preventing dental carries. [11] 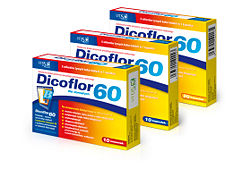 Despite all of L. rhamnosus GG positive attributes and the beneficial effects it can have on the human body, it is not found in the majority of the population. However, there are several of ways to get this friendly bacteria into the gut such as eating most dairy products, as well as fruit drinks. Along with food, a person may also take pills of Dicoflor 60 which contains 6 billion LGG bacteria in one capsule. In addition to Dicoflor, there are many other companies that generate compacted capsules of L. rhamnosus such as Culturelle. Companies use LGG as their ideal probiotic bacteria strain because it meets the conditions of being genetically stable exhibiting no possibility of mutations, can survive in the gastrointestinal tract because of its strong resistance to bile salts and stomach acid, has a rapid growth rate, and can produce a substance that is active against harmful bacteria. Dicoflor is advertised for people who are on antibiotic treatment, have travelers diarrhea, and for women who are in their last month of pregnancy who have a history of allergies. It is also suggested that people who are constantly active and do not have time for regular meals, and for people who are over stressed. [12] LGG is now a trademark owned by Valio Corporation who signed an agreement with Gorbach and Goldin giving Valio Ltd. rights to market the LGG probiotic brand globally.[13]

L. rhmnosus GG is the most studied probiotic bacterium today, especially for its positive effects on the gastrointestinal tract. A lot of research is being conducted on the effects it has on the gastrointestinal tract and its effect on immunity. Some older studies incorporating the benefits of LGG shows its ability to reduce inflammation of the intestine in children with cystic fibrosis. Studies have also shown how LGG can improve the efficacy of several vaccines such as the booster polio vaccination. More recently, the National Institute of Health is researching whether LGG improves immune response to the flu vaccine. Another study that currently in progress is examining if giving LGG to pregnant women who exhibit a family history of asthma reduces the chance of their new born infants having asthma. [14] LGG has also been experimented with on rats to show how it can inhibit chemically stimulated intestinal tumors in rats. [15]

Effect of Long-Term Consumption of a Probiotic Bacterium, Lactobacillus rhamnosus GG, in Milk on Dental Caries and Caries in Children

In this study we are shown how LGG can reduce dental caries in children and promotes a healthy oral environment. The leading cause of dental caries is Streptococci. In order for this research to be conducted, 594 children ranging from the ages of 1 to 6 received milk with their meals 5 days a week for 7 months. At the end of this experiment, results showed less dental caries in the LGG group and lower mutans Streptococcus counts. In addition, LGG was found to reduce the risk of future caries significantly. When LGG administered into the mouth, it adheres to the oral cavity and eliminates the caries causing bacteria.[16]

Is Lactobacillus GG Helpful in Children with Crohn's disease? Results of a Preliminary, Open-Label Study

Puneet Gupta et al. did a study to see if LGG can be useful to children who have Crohn's disease. They took four children with mild to moderately active Crohn's disease and these patients were given LGG for 6 months. After 6 months, tests showed that there was significant improvement in clinical activity after starting LGG treatment and the disease index was 73% lower than baseline. [17]

Patients who have colorectal cancer usually must go through 5-fluorouracil based chemotherapy which is often associated with diarrhea. It was reported that the patients who took LGG during their chemotherapy reported less abdominal discomfort, required less hospital care, and had less diarrhea.[18]

Effect of Lactobacillus GG supplementation on pulmonary exacerbations in patients with cystic fibrosis: A pilot study

In order to examine the effects LGG can have on patients with cystic fibrosis, 19 children received LGG for 6 months while another 19 received probiotic ORS and then LGG. The study shows that patients treated with LGG showed a reduction of pulmoary exacerbation's and fewer hospital admissions than patients who were first treated with ORS.[19]