The hierarchy of scientific classification in biology. 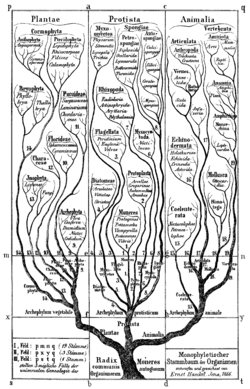 In biology, a kingdom is the second highest level taxon of organisms in scientific classification. The domains or empire are the topmost level. The kingdoms are then divided into smaller groups called phyla (for animals) or divisions (for plants).

Carolus Linnaeus distinguished two kingdoms of living things: Animalia for animals and Vegetabilia for plants (Linnaeus also treated minerals, placing them in a third kingdom, Mineralia). Linnaeus divided each kingdom into classes, later grouped into phyla for animals and divisions for plants. When single-celled organisms were first discovered, they were split between the two kingdoms: mobile forms in the animal phylum Protozoa, and colored algae and bacteria in the plant division Thallophyta or Protophyta. However, a number of forms were hard to place, or were placed in different kingdoms by different authors: for example, the mobile alga Euglena and the amoeba-like slime moulds. As a result, Ernst Haeckel suggested creating a third kingdom Protista for them.[1][2]

Chatton's proposal was not taken up immediately; a more typical system was that of Herbert Copeland, who gave the prokaryotes a separate kingdom, originally called Mychota but later referred to as Monera or Bacteria.[4] Copeland's four-kingdom system placed all eukaryotes other than animals and plants in the kingdom Protista.[5]

It gradually became apparent how important the prokaryote/eukaryote distinction is, and Stanier and van Niel popularized Chatton's two-empire system in the 1960s.[6]

Robert Whittaker recognized an additional kingdom for the Fungi. The resulting five-kingdom system, proposed in 1969, has become a popular standard and with some refinement is still used in many works, or forms the basis for newer multi-kingdom systems. It is based mainly on differences in nutrition: his Plantae were mostly multicellular autotrophs, his Animalia multicellular heterotrophs, and his Fungi multicellular saprotrophs. The remaining two kingdoms, Protista and Monera, included unicellular and simple cellular colonies.[7]

In the years around 1980 there was an emphasis on phylogeny and redefining the kingdoms to be monophyletic groups, groups made up of relatively closely related organisms. The Animalia, Plantae, and Fungi were generally reduced to core groups of closely related forms, and the others thrown into the Protista. Based on rRNA studies Carl Woese divided the prokaryotes (Kingdom Monera) into two kingdoms, called Eubacteria and Archaebacteria. Carl Woese attempted to establish a Three Kingdom system in which Plants, Animals, Protista, and Fungi were lumped into one kingdom of all eukaryotes. The Eubacteria and Archaebacteria made up the other two kingdoms. The initial use of "six Kingdom systems" represents a blending of the classic Five Kingdom system and Woese's Three Kingdom system. Such six Kingdom systems have become standard in many works.[8]

A variety of new eukaryotic kingdoms were also proposed, but most were quickly invalidated, ranked down to phyla or classes, or abandoned. The only one which is still in common use is the kingdom Chromista proposed by Cavalier-Smith, including organisms such as kelp, diatoms, and water moulds. Thus the eukaryotes are divided into three primarily heterotrophic groups, the Animalia, Fungi, and Protozoa, and two primarily photosynthetic groups, the Plantae (including red and green algae) and Chromista. However, it has not become widely used because of uncertainty over the monophyly of the latter two kingdoms.

Woese stresses genetic similarity over outward appearances and behaviour, relying on comparisons of ribosomal RNA genes at the molecular level to sort out classification categories. A plant does not look like an animal, but at the cellular level, both groups are eukaryotes, having similar subcellular organization, including cell nuclei, which the Eubacteria and Archaebacteria do not have. More importantly, plants, animals, fungi, and protists are more similar to each other in their genetic makeup at the molecular level, based on rRNA studies, than they are to either the Eubacteria or Archaebacteria. Woese also found that all of the eukaryotes, lumped together as one group, are more closely related, genetically, to the Archaebacteria than they are to the Eubacteria. This means that the Eubacteria and Archaebacteria are separate groups even when compared to the eukaryotes. So, Woese established the Three-domain system, clarifying that all the Eukaryotes are more closely genetically related compared to their genetic relationship to either the bacteria or the archaebacteria, without having to replace the "six kingdom systems" with a three kingdom system. The Three Domain system is a "six kingdom system" that unites the eukaryotic kingdoms into the Eukarya Domain based on their relative genetic similarity when compared to the Bacteria Domain and the Archaea Domain. Woese also recognized that the Protista Kingdom is not a monophyletic group and might be further divided at the level of Kingdom. Others have divided the Protista Kingdom into the Protozoa and the Chromista, for instance.

Nevertheless, others note that the adoption of the three domain classification, and the retention of Animalia, Plantae, and Fungi as independent kingdoms, has forced biologists to reconsider the number of kingdoms, given the earlier branching off the tree of life of many groups of organisms, leaving the classification of the tree of life into kingdoms unsettled and in a state of flux.[11]

(Note that the equivalences in this table are not perfect. e.g. Haeckell placed the red algae (Haeckell's Florideae; modern Florideophyceae) and blue-green algae (Haeckell's Archephyta; modern Cyanobacteria) in his Plantae, but in modern classifications they are considered protists and bacteria respectively. However, despite this and other failures of equivalence, the table gives a useful simplification.)