Jerusalem is an ancient city holy to the three Abrahamic religions of Judaism, Christianity, and Islam. It was divided by the ceasefire between the State of Israel and the Arab powers, but captured by Israel in the 1967 Arab-Israeli War, and remains under Israeli governance. Israel claims the entire city as its traditional capital, while the Palestinian Authority considers East Jerusalem as its capital. 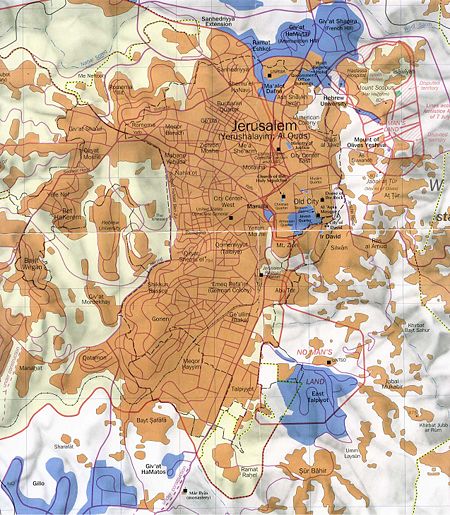 Control of Jerusalem is among the most difficult issues in both the Arab-Israeli and Israel-Palestine Conflicts.

Some areas are significant to two or three of the Abrahamic religion, for different historical reasons, while others are most significant to one faith.

Prior to 1967, Israel's capital was Tel Aviv. The United States and a number of other nations avoid the conflicting claims by maintaining their embassies there, but keeping a major consulate in Jerusalem.