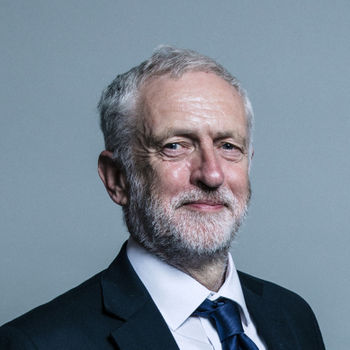 Jeremy Bernard Corbyn (born 26th May 1949) has been the Leader of the Opposition and leader of the Labour Party in the United Kingdom since 12th September 2015. He was elected in a landslide victory following 32 years in Parliament as a backbench MP for Islington North.

Corbyn's leadership victory was not initially expected, and indeed he was at first seen as a rank outsider, one who barely received enough nominations from other MPs to stand for the leadership.[1] However, his predecessor Ed Miliband had introduced reforms to broaden participation in the contest, and in any case he received the most votes of any candidate from full members, by a clear margin.[2]

Corbyn's left-leaning politics and activism contrasted sharply with the more centre-left position of many senior Labour figures; nevertheless, he was able to establish a team of Shadow Cabinet members, including his long-term ally John McDonnell as Shadow Chancellor.[3]

Following the June 2016 UK referendum on withdrawal from the European Union, a majority of Corbyn's Shadow Cabinet team resigned and many in the party urged him to quit, claiming that he had been an unenthusiastic campaigner for the losing 'Remain' side; he then lost a confidence vote of Labour MPs by 172 votes to 40. However, he resolved to remain in the post because of the mandate awarded to him by ordinary party members in the leadership contest.

In the June 2017 election, Corbyn led the party to a gain of 30 seats and remained as leader. After the 2019 general election produced Labour's worst result since 1935, he confirmed he would resign as soon as a successor is chosen (there is currently no deputy leader in place who could stand in if he resigned immediately).

Jeremy Corbyn was born into a middle-class family in 1949 in Wiltshire, and was later brought up in Shropshire as the youngest of four brothers. He has three sons from a previous marriage; Laura Alvarez is his third wife.[4]