Infantry are soldiers that directly confront the enemy, to defeat them with maneuver, individual weapons fire, the fire of light support weapons directly assigned to their unit, and by directing fires from artillery and close air support. Combat teams that include infantry, armored vehicles, artillery, aviation reporting to the ground commander, and combat engineers conduct combined arms operations.

To Close with and Destroy the enemy day or night; regardless of weather or terrain. — Role of the Canadian Army Infantry

Infantry comprised the very first forms of military, before cavalry and artillery were invented. The Macedonian phalanx, the Roman legions, the archers and pikemen at the Battle of Agincourt — all were ancestors of today's soldiers joined by electronics that turn night into day -- and have robots to carry their heavy equipment. Even in the ancient period, infantry was differentiated in various ways: light infantry wore minimal armor and were the most mobile, while heavy infantry were armored and fought from tight formations. 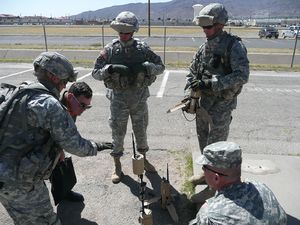 Infantry are differentiated by the way they move into battle, and sometimes the way they fight (i.e., other than on foot):

These various types may have special training and equipment for specific environments, such as mountain warfare, arctic combat, jungle warfare, etc. There is a spectrum from regular infantry; to highly trained but still basically conventional soldiers such as Rangers and medium-range reconnaissance units;to units qualified for special reconnaissance and guerrilla warfare deep behind enemy lines.

The basic weapon of an infantryman is a rifle, although soldiers whose primary duty is to be part of a weapons crew, or operating sensors and communications, may have a lighter weapon (e.g., carbine or pistol) that is less likely to get in the way of their primary task. Still, there is a mystique to the rifle:

This is my rifle. There are many like it, but this one is mine. It is my life. I must master it as I must master my life. Without me my rifle is useless. Without my rifle, I am useless. I must fire my rifle true. I must shoot straighter than the enemy who is trying to kill me. I must shoot him before he shoots me. I will. My rifle and I know that what counts in war is not the rounds we fire, the noise of our burst, or the smoke we make. We know that it is the hits that count. We will hit.

My rifle is human, even as I am human, because it is my life. Thus, I will learn it as a brother. I will learn its weaknesses, its strengths, its parts, its accessories, its sights and its barrel. I will keep my rifle clean and ready, even as I am clean and ready. We will become part of each other. Before God I swear this creed. My rifle and I are the defenders of my country. We are the masters of our enemy. We are the saviors of my life. So be it, until victory is America's and there is no enemy.

In addition to the basic weapon, the infantryman may have edged weapons of combat knife or bayonet, yet still in the tradition of the sword. Other individual weapons include thrown and launched grenades, portable guided missiles, and explosives, as well as helping carry ammunition for crew-served weapons. Increasingly, modern infantrymen carry a range of military electronics, including radios, night vision devices or thermal viewers, navigational equipment such as a Global Positioning System (GPS) receiver, and laser designators to direct heavy fires onto target.

While mechanized and air assault infantry do have accessible storage on hand, the infantryman carries necessities: water, food, ammunition, batteries, and minimal shelter.

While the specific methods differ with nation, and infantry organization, the smallest unit of regular infantry (as distinct from behind-the-lines special operations unitss, a fire team of 3 to 5 soldiers. Fire teams mutually support one another, one providing fire to distract the enemy from movement of another. Fire teams form squads of 10-13 men; a squad will usually have at least one heavier weapon, such as a machine gun. Squads form platoons of 20-50 men, with a small leader group, additional heavy weapons, and often medical support. Several platoons form a company (land forces) of 100-200 soldiers, with additional leadership, communications and sensors, heavy weapons, and supply.

In modern militaries, units above the company level tend to be teamed with other combat arms to form balanced combined arms teams. Nevertheless, the term "infantry" will extend to organizations as large as divisions of 25,000 or so soldiers.

Infantry operations build up from the smallest units of squads or platoons, with 3-5 man fire teams operating within them. The eight basic U.S. Army infantry battle drills are: [1]

Among other skills, and working under standard command and control doctrine, [2] they must be able to deliver fire,[3] operate in combined operations with armored vehicles,[4] etc.