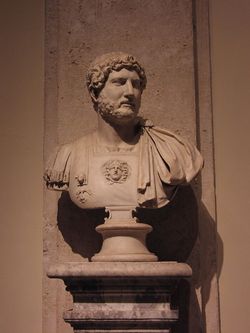 (CC [1]) Photo: Sébastien Bertrand
A bust of the Emperor Hadrian

Publius Aelius Hadrianus, commonly known as Hadrian, was Roman Emperor from 117 until his death in 138. He succeeded Trajan, his great uncle. Though it is known that Hadrian was born on 24 January 76, precisely where he was born is less certain though it was probably in Rome. Hadrian was a senator and held numerous positions of power before his elevation to Emperor. It was Hadrian who informed Trajan of the death of Nerva, the previous Emperor who had adopted Trajan and made him his heir. Hadrian was usually close to Trajan, and therefore was an important part of the imperial administration. Trajan adopted Hadrian on 8 August 117, and three days later the Emperor's death was announced. When the news broke, the army proclaimed Hadrian Emperor.[1][2] 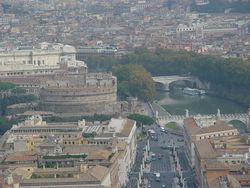 (PD) Photo: Central Intelligence Agency
The construction of Hadrian's Mausoleum (the round building) began in 123, but was incomplete on his death in 138.

(CC [2]) Photo: Author: Jannis Andrija Schnitzer
The Pantheon was rebuilt by Hadrian, but retains the inscription stating that it was built by Marcus Agrippa.

An intelligent and physically active man, Hadrian was also a patron of the arts and a prolific builder. Most notable amongst his architectural undertakings are the palatial complex at Tivoli, the reconstruction of the Pantheon, and the creation of his mausoleum in Rome, which is now the Castel Sant'Angelo. The Villa Adriana was built in two separate phases: the first began in 118, soon after Hadrian became Emperor, and lasted until 125, while the second took place between 125 and 133.[3] Located 30km outside Rome, the vast complex (the grounds may have covered up to 270 acres) became a favoured residence of the Emperor and became the location of the centre of the Empire's administration.[4] The Pantheon was completely rebuilt by Hadrian, replacing an earlier building on the site of the same name, dating from the reign of Augustus. It even retains the original inscription above the entrance declaring that it was built by Marcus Agrippa, an unusal concession by an Emperor. The work probably began in the late 120s, and the building still stands today. It is highly influential in Western architecture and an iconic building.[5] Hadrian's Mausoleum was founded in 123 but remained unfinished on his death in 138, so his ashes were not interred there until 140. His successor, Antoninus Pius ensured the work was completed and the building came to house the remains of the Antonine and Severan dynasties.[6]