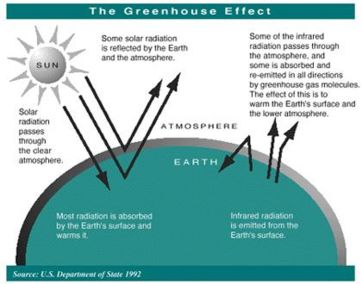 EPA illustration of greenhouse effect.
The sun radiates energy to the earth mainly in the form of ultraviolet and visible (short wavelength) light. This energy, which is not absorbed by a clear atmosphere, warms the surface of the earth. The warm surface radiates energy back into space in the form of infrared (long wavelength) light. Much of the infrared energy radiated by the surface does not disappear in space, but is absorbed by greenhouse gases present in the lower atmosphere. This absorption warms the lower atmosphere.

The greenhouse effect was discovered by Joseph Fourier in 1824 and first investigated quantitatively by Svante Arrhenius in 1896 [3][4].

The physics of the greenhouse

The essential condition for a greenhouse effect is the presence in a planetary atmosphere of gases that absorb (and emit) in the thermal radiation band of the planetary surface or lower atmosphere. Greenhouse gases often are transparent, or nearly so, to incoming solar radiation (ozone and water vapor are exceptions). The surface thermal radiation band is in the long-wave infrared region (3.5 µm - 100 µm). The greenhouse gases are triatomic (or more, but note the exception for Titan) molecules which absorb energy into a variety of rotational, bending, and stretching modes. Common solar-system gases that meet the requirements are water vapor (H2O), carbon dioxide (CO2), ozone (O3), and methane (CH4). For Earth, H2O, CO2, and O3 provide most of the greenhouse. Common homonuclear diatomic gases, such as nitrogen (N2) and oxygen (O2), do not afford dipole transitions in the infrared and hence hardly absorb energy.

The greenhouse effect occurs at a state near local thermodynamic equilibrium. When a gas molecule is excited by an infrared quantum, the energy is quickly redistributed according to the principles of statistical mechanics. Thus infrared absorption adds energy and heats the gas. Likewise, thermal infrared emission withdraws energy and cools the gas. In simple terms, this means that an atmosphere that contains greenhouse gases absorbs heat by absorbing radiation of the proper wavelength as it passes through, and loses heat by emitting the same wavelength. (By Kirchoff's law, absorptivity equals emissivity for any given wavelength.) Whether the temperature rises or falls depends on the balance between the two effects and on any other heating or cooling processes. On Earth, transfer of sensible heat from the ground and the release of latent heat of vaporization when water vapor condenses also are significant sources of energy to the atmosphere.

It should be noted that the greenhouse gas molecules maintain their identity and are not destroyed or chemically altered. This differs from the case of ionizing radiation absorption (such as the absorption of solar ultraviolet radiation by oxygen and ozone).