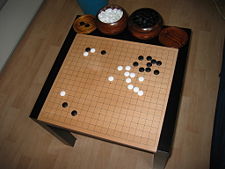 Go is a board game played by two players. It is called Weiqi (圍棋; 围棋) in Chinese, Baduk (바둑) in Korean, and Igo or Go (囲碁; 碁) in Japanese.

Go is the world's oldest game that is still played in its original form, with a documented history of over 2,500 years. It originated in China, is a traditional game throughout East Asia, is considered the national game of Japan [1], and is now played around the world. It is the second most played board game in the world, after Chinese chess.

Go reached the West via Japan, so in English the name of the game and many of the words used to describe positions or strategic concepts are borrowed from Japanese. We indicate such words by putting them in italics the first time they are used below.

There is a large Wiki devoted to discussing the game, Sensei's Library.

Go is played on a flat board (a goban) with a grid of 19x19 intersections. Two sets of stones, white and black, are used. The game is played in turns and unlike Chess, black makes the first move in go. Each stone is placed on an intersection and the goal is to capture more territory than the opponent. In go, it often matters whether a given move is beautiful or produces good shape.

It is possible to play essentially the same game on a board of size different from the standard 19-line board. 13-line and 9-line boards also moderately common, mainly used to get a quicker game or to keep things relatively simple for teaching. Each of these sizes roughly doubles the number of intersections: 92=81, 132=169, 192=361. Historically, 15-line boards were once normal in China and 17-line in China, Tibet and Japan. There has been some experimentation with 21 and 23-line boards.

There are a few different Rule Sets for playing Go. They are very similar to each other and for most games the different rules give similar results.

The core rules are:

While the above rules are sufficient for most games, specific rules that exactly define the terms that are used in the rules can be a bit longer.[1]

There are two systems of scoring, Japanese and Chinese. The Japanese method is generally used in Western countries (except New Zealand). Both systems count territory — the number of empty intersections that a player's stones surround — plus something else, but the "something else" is different. Japanese scoring counts territory plus the number of enemy stones captured. Chinese scoring counts territory plus the number of your stones on the board. Since capturing some number of stones reduces the stones the opponent has on the board by exactly that number, the two systems almost always give the same result. In either system, the winner is the player with the higher score.

However, a seki, an area where neither player can move because the opponent could then capture, is scored differently in the two systems. In Japanese scoring, a seki does not count for either side since it is not territory and no stones have been captured. In Chinese scoring, both sides count the stones they have on the board in the seki. If one player has more stones involved in the seki than his opponent, the scores will be different in the two systems. It is possible, though extremely rare, to have a game where either player can be scored as the winner depending which system is used.

Go has a widely used and fairly convenient handicap system. Players of more-or-less equal strength start with an empty board, black plays first, and white gets a small bonus in the scoring, called komi, to compensate for that first move advantage. Komi is normally 5.5 points if Japanese scoring is used. For unequal players, some black stones are placed on the board before play begins, giving black a substantial advantage. White then plays first and komi is half a point to make a drawn score impossible. On a 19-line board, handicaps from two to nine stones are normal and up to 17 is possible. On a 13-line board, five is the usual maximum; this gives roughly the same advantage as nine on a 19-line board. The board has markings for the hoshi points where the handicap stones are placed.

Go has a system of ranks similar to those used for martial arts. A number of different regional groups — at least Chinese, Japanese, Korean, American, and European — have ranking systems and the major sites for online play, Internet Go Server and Kiseido, each have their own. All these systems are roughly comparable, but no two are exactly the same. It is moderately common to see a player whose ranks in two systems are a few levels different.

A beginner is ranked as some large number of kyu, 25 or 35 in different systems, and the number decreases as strength increases. In martial arts, the kyu ranks wear colored belts. Above 1 kyu comes 1 dan, shodan, corresponding to a black belt in martial arts. There are amateur ranks up to 6 or 7 dan.

The appropriate handicap can be calculated from the ranks. For amateur players, ranks are about one stone apart in strength so a 2 dan would take 5 stones from a 7 dan and would give a 1 kyu 2 stones; both games would then be approximately even. Except for teaching, a 2 dan would not usually play against a 20 kyu since no possible handicap would make an even game of that.

There is no exact date for the invention of Go. One legend dates the invention to the Emperor Yuo who taught the game to his eldest son Dan Zhu. Most modern writers think, that this legend (and a few similar legends), were written down in the Han period, to make the game appear older than it really is. They date the invention to the period of 1000-400 BC.[2]

Go is conceptually simpler than chess (especially when go rules are properly formulated):

Chess as a whole does not admit any natural, regular generalizations onto larger boards (but many chess endings do). In the case of go, one may play the game on the square boards of arbitrary n by n size. More than that, one may play go on rectangular boards or even on arbitrary finite simple graphs. Thus go is so mathematical that it provides a graph invariant: with arbitrary graph we may associate the result of the game played optimally by both players (mathematical theory of games states that such optimal strategies exist; it's a corollary to the respective Zermelo's theorem, 1913). There has been some work on computer programs that exhaustively analyse go on small boards; the 5 by 5 board has been solved [2].

The handicap system is another important difference. It is much easier for two players of significantly different strength to have an interesting game — one in which both have to work at it and the outcome is often in doubt — in go than in chess. Of course, there are limits to this; nothing will make a game between a master and a beginner interesting for the master, but even a master may have trouble against a strong amateur with a large handicap.

There is a saying that "Chess is a battle; Go is a war." The goal is not just to take out the enemy king, but to control more of the board than the opponent. Expert Go players take the overall board position into account in choosing almost every move.

Go is one of the most complex games in the world, far outweighing games such as chess in the number of possible game positions. Indeed, computer chess programs, by year 2000, became as strong or even stronger that the strongest (human) chess players. It took longer to achieve this for go.

Go strategy is also studied as an metaphor for Asian strategy compared to western strategy. [3][4]

It is interesting to note that the US engaged the Soviets on multiple "fronts" during the Cold War with buffer states (eg. South Korea as buffer state and Japan as main ally), whereas today "China is in a crescent-shaped ring of encirclement" by US allies.[5][6]

Neuroimaging research suggests players use the right hemisphere of their brain while playing Go, responsible for position and orientation, slightly more than the left side. The game requires a more global strategy than chess, and thus differs from the more left hemisphere activated activity of playing chess. A study of six subjects suggests successful Go playing requires practice and experience rather than sheer intellectual ability.[7] Another study suggests the ability of professional Go players to assess visual information and nonmotor learning memory processes is mediated in part by the cerebellum and precuneus.[8]