The Free Soil Party was a short-lived political party in the United States at the end of the Second Party System. It was formed by Free-Soil Democrats (Barnburners) in response to the Democratic Party's refusal to adopt the Wilmot Proviso to its platform in the 1848 presidential election. The party ran candidates in every election between 1848 and 1852. The Compromise of 1850 placated some Free-Soilers and they returned to the Democratic party. Others, however, supported John P. Hale for president in 1852. His poor showing led to the demise of the party. Afterwards, the party was largely absorbed by the Republican Party in 1854.

The Free Soil Party was an anti-slavery party, but members were not necessarily abolitionists. Many free-soilers would not challenge slavery where it existed in the U.S. but did not want to see it expand into the territories. Free soilers viewed slavery as a social bad because it granted slaveholders unfair and unequal economic advantages that disadvantaged freeholders in the marketplace. Thus, their main argument was that free men on free soil comprised a morally and economically superior system to slavery. The free soilers were against the expansion of slavery but not necessarily the idea or legality of slavery; their goal was to gain the land to the west and to keep the land free of slaves. Conversely, abolitionists denounced slavery as morally sinful. 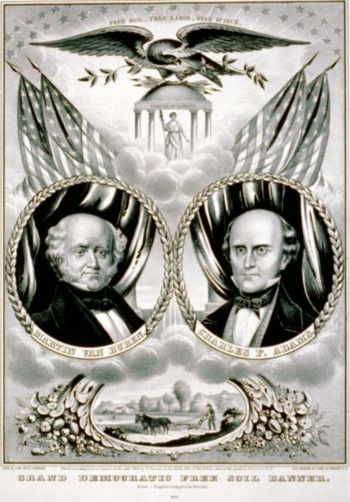 Free Soil candidates ran on the platform that declared: "...we inscribe on our banner, 'Free Soil, Free Speech, Free Labor and Free Man,' and under it we will fight on and fight ever, until a triumphant victory shall reward our exertions."

The party called for a homestead act and a tariff for revenue only (as opposed to a protective high tariff). The Free Soil Party attracted mainly Yankees from the Northeast and upper Midwest. It was especially powerful in Yankee areas of upstate New York, western Massachusetts, and northern Ohio.

In 1848, the Free Soil Party's first convention was held in Buffalo, New York, where the party nominated former Democratic President Martin Van Buren of New York, with Charles Francis Adams Sr. of Massachusetts as vice president. The main party leaders were senators Salmon P. Chase of Ohio and John P. Hale of New Hampshire. Van Buren received 291,616 votes against Zachary Taylor of the Whigs and Lewis Cass of the Democrats. Because the party was mainly made up of disaffected Democrats, the Free Soil Party ended up splitting the Democratic vote in the 1848 election, giving it to the Whig candidate Taylor. The party won no electoral votes. While they lost their presidential bid they were successful in electing two senators and fourteen representatives to the thirty-first Congress.

In the long run, the Free Soil Party was important as it gave voice to a growing segment of the population that was upset at the tolerance of the U.S. political parties towards slavery. From this party came many of the leaders of the Republican Party including Senator Charles Sumner, architect of Reconstruction, Vice President Henry Wilson and Treasury Secretary Salmon P. Chase.