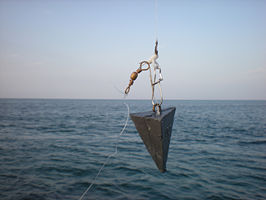 (CC) Photo: Jeffrey Gutermen
Fishing sinkers come in nearly innumerable shapes and sizes. This is a pyramid sinker, typically used to anchor bait to a water bottom, and is made of lead.

A fishing sinker or plummet is a weight used to increase the rate of sink, anchoring ability, and/or casting distance of fishing bait, fishing lures, or fishing nets. Fishing sinkers may be minutely small for fly fishing applications, from 1⁄32 to several ounces for general applications, or as large as several pounds or more for deep sea fishing or nets. They are molded into nearly innumerable shapes for diverse fishing applications. Environmental concerns surround the usage of most fishing sinker materials. 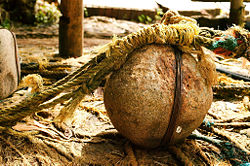 (CC) Photo: Jared Zimmerman
A fishing sinker in India made of stone. This one is used to anchor a net.

In ancient times as well as sometimes today, fishing sinkers consisted of materials found easily in the natural environment, such as stones, rocks, or bone. In the ordinary case today, however, sinkers are made of lead, since the material is inexpensive and easily molded into a large variety of shapes for specific fishing applications.

For example, pyramid sinkers, shaped as the name implies, are used when it is desirable to anchor on the bottom of water bodies. They are attached to the terminal end of fishing line by loops of brass. Another common type, barrel sinkers, feature a narrow hole through their length. Fishing line is threaded through the hole. Yet another common example of sinkers is split-shots—small round sinkers split half-way through and crimped at some point along the line—which are used for nearly innumerable applications. Sill another, bullet sinkers—bullet-shaped sinkers, as the name indicates—are used widely for Texas Riged plastic worms in Largemouth Bass fishing.

Human-originated lead is responsible for increases in lead found in water, which has resulted in the deaths of many waterbirds and other aquatic organisms due to lead poisoning. Because of these concerns, most lead fishing sinkers have been outlawed in the U.K., Canada, some U.S. states, and all U.S. National Parks are now 100% lead-free zones.

Since the disfavor of lead sinkers, steel and brass have been marketed as substitutes, although fishermen have not widely adopted them due to their additional bulk and cost over lead. A material introduced more recently, tungsten, is enjoying increasing use, especially among Largemouth Bass fishermen. Although several times costlier than lead, fishermen tend to view tungsten as desirable since it is denser than lead and thus provides equivalent weight at around half of the bulk of lead. The environmental effects of tungsten within water bodies, however, are essentially unknown, a concern that has naturally arisen due to the inevitably of losing sinkers, irrespective of the material, during routine fishing.[1]

"Junk" sinkers, such as heavy bolts and other chunks of throw-away metal, especially of steel, are occasionally used by especially those fishing for catfish in freshwater.