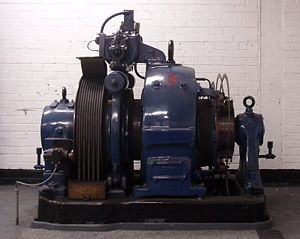 The elevator or lift (in American and Commonwealth English, respectively), is a mechanical device used for vertical transport. There are two types of elevators: hydraulic and roped elevators.

The development of the elevator in the late 19th century allowed for the creation of the modern skyscraper. People had the knowledge to create towering buildings, and lift technology is ancient, but it was not until Otis created the first safety elevator for passengers that technology and design could be combined. Otis' elevators features claws that would extend outward if the rope broke, thereby stopping the elevator from dropping to the ground.

The design concept of the elevator is simple: it is a rope or cable attached to a box, that allows for vertical movement.

Modern day elevators consist of a car within an enclosed space called a shaft. Vertical movement of elevators is controlled by a steel cable being pulled over a circular pulley, driven by an electrical motor, with a counterweight used to balance the weight of the elevator car.

By far the best-known name in elevators, the Otis Company, is the world's largest elevator manufacturer.

The Schindler company is another common supplier of elevators.