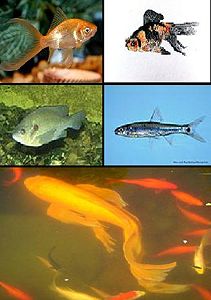 The popularity of ornamental coldwater fishes sustained the aquarium hobby for hundreds of years until the tropical varieties were introduced in the 19th century. Coldwater aquarium species are mostly cultivated varieties of the Common Goldfish (Carassius auratus), a member of the cyprinid family originating in Asia. A near relative in the same family, the Koi (Cyprinus carpio) has been developed in Japan, although it is generally kept in the outdoor pond rather than the aquarium. Koi are traditionally viewed and judged from above and their colors are developed accordingly. Goldfishes and Koi are long-lived and adapt well to aquarium and pond culture. No standard size descriptions can be made, as they generally grow to the limits of their environment, and no habitat can be given as they are aquarium developed.

A number of species from temperate regions of North America, Europe, and Japan have recently become popular as aquarium fish. There may be local laws against selling some species or removing them from their habitat.