The Coastal taipan (Oxyuranus scutellatus) also commonly known as the common taipan or just simply the taipan is a highly venomous species of snake found in the coastal regions of Australia and in parts of New Guinea and it belongs to the Elapidae family and the Hydrophiinae subfamily. It is the largest venomous snake in Australia and one of the largest venomous snakes in the world. It poses a serious risk to humans as it is one of the most venomous land snakes known to man. Subcutaneous murine LD50 is approximately is 0.106 mg/kg according to Dr. Bryan Grieg Fry of the University of Queensland.[2] However, different studies give differing LD50 values. There are two subspecies, there's the Papuan taipan (Oxyuranus scutellatus canni) and then there is the nominate subspecies described in this article, the coastal taipan (Oxyuranus scutellatus scutellatus).

The coastal taipan was first described by German naturalist and explorer Wilhelm Peters in 1867.[3] The generic term "Oxyuranus" is of Greek origin and means pointy-tail. The specific epithet "scutellatus" also originates from the Greek language and means shielded.[4] 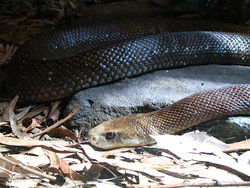 This is the longest venomous snake native to Australia.[5] Males tend to be slightly larger than females. Adults of this species are typically between 1.5 m (4.92 ft) and 2 m (6.56 ft) in length,[6] with an absolute maximum size of 3.3 m (10.83 ft). However, according to the Queensland Museum, the longest scientifically recorded length for the coastal taipan as recorded in Australian museum collections is only 2.9 m (9.51 ft) - that snake, which was a captive specimen, known as 'Terrence' to his friends, weighed 6.2 kg (13.67 lbs). The largest wild-caught museum specimen reliably measured was a male with a snout-vent length of 2.26 m (7.41 ft).[7] The larger body size of this species may be an adaptation to feeding on large prey.[8] No wild or captive specimen has ever measured longer than 2.9 m (9.51 ft). This species is a medium to large snake, with a robust build and a deep, rectangular-shaped head distinct from the slender neck. The body colour may be yellowish, reddish brown, dark brown or almost black. The species undergoes a seasonal change in colour, with individuals becoming darker in winter and fading in summer. The head is noticeably paler than the body, particularly in juveniles (the head will darken with age however the snout always remains pale). Dorsal scales may be slightly keeled, at least on the neck, otherwise they are smooth. The ventral surface is yellowish to cream coloured with scattered orange blotches. The eyes are large, with an intense orange-brown iris and round pupils. Its fangs are relatively long for an elapid, measuring up to 13 mm (0.51 in). It has the longest recorded fang length of any venomous Australian snake.[5]

Although no strong parallels with other Australian elapids are evident, many similarities may be noted between data presented on the taipan and by Fitzsimmons (1962) on an African elapid Dendroaspis polylepis (the black mamba). Although the black mamba is considerably larger, the two species resemble each other in general morphology, colour, venom toxicity, "snap and release" bite (in contrast to "chewing" bites in other elapids of both continents), clutch size (9-14 in Dendroaspis versus 7-17 in Oxyuranus), hatchling size (40-50 cm total length), rapid growth in juveniles, male combat, males growing larger than females, and feeding primarily on mammals. These similarities clearly represent evolutionary convergence rather than taxonomic affinity (Saint Girons and Detrait, 1980).[8]

Coastal taipans occur only in Australia and the island of New Guinea, which comprises two Indonesian provinces on the west side of the island and the nation of Papua New Guinea on the east side of the island. The Australian subspecies (Oxyuranus scutellatus scutellatus) is found in the Kimberley Division of Western Australia, the northern part of the Northern Territory and along the coasts of eastern Queensland. The southernmost part of this subspecies' range is the most northeastern tip of New South Wales bordering Queensland. Coastal taipans do not live anywhere where the maximum winter temperature is only 20 °C (68 °F).[8][6] The second subspecies (Oxyuranus scutellatus canni) is found in the island of New Guinea, with much higher concentrations of the snake being found in the nation of Papua New Guinea.[10]

This species is found in warm temperate to tropical climate in monsoon forest fringes, wet and dry open sclerophyll forest, woodlands and sugar cane plantations and in natural and artificial grassy areas including grazing paddocks, disused rubbish tips and cane fields, where there is often an abundance of rats. Thickets of introduced lantana are also favoured habitat. The coastal taipan shelters in abandoned animal burrows, hollow logs and in piles of vegetation and litter.[11][12]

Coastal taipans are active throughout the year, however they are most commonly encountered in late winter and spring. It is a terrestrial species and it is mostly diurnal, but may also be crepuscular tending to nocturnal in times of hot weather. Taipans are extremely efficient hunters. Its bite is fast and accurate and its venom potent. It usually releases its prey after one or more jab-like bites and follows by sense of smell until the prey succumbs to the venom. This species likes to shelter in abandoned animal burrows (especially those under tree roots and logs), hollow or rotting logs and in deep leaf litter. Coastal taipans are generally alert, but timid species which will make a quick escape if approached and is rarely ever seen. If cornered or provoked it will coil in loose, open loops with the forebody slightly raised and strike and release rapidly more than once if within range.[11] 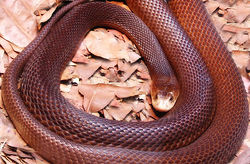 Based on museum or captive specimens, individuals of this species feed exclusively on endotherms: 18 mammals and one bird were recorded in coastal taipan guts. The snakes take a wide variety of mammals, including both marsupials and rodents. Many prey items are large (e.g., a young bandicoot (Isoodon macrourus) of 40 gm mass). Kinghorn (1923) reports the occurrence of remains of a quoll (Dasyurus hallucatus) in the gut of a large taipan. Adult quolls attain a mass of approximately 600 gm.[8] Feeding apparently occurs year-round, but sample sizes are too low to reveal any seasonal trends. In the wild, coastal taipans are known to feed only on warm-blooded prey, i.e. mammals, such as mice, rats, bandicoots, and birds. Young taipans, in captivity at least, will also eat skinks. When hunting, the taipan appears to actively scan for prey using its well-developed eyesight, and is often seen travelling with its head raised above ground level. Once prey is detected the snake ‘freezes’ before hurling itself forward and issuing one to several lightning-fast bites. The prey is released and allowed to stagger away - this strategy minimizes the snake’s chance of being harmed in retaliation, particularly by rats which can inflict lethal damage with their long incisors. After a few moments the taipan tracks down the dying animal by following the scent trail with its flickering tongue.[6][13]

Newly-hatched and immature snakes have a number of natural enemies, including various birds of prey and goannas. Few predators would take on a large adult coastal taipan, however people still routinely kill them on sight.

The species’ only recorded parasites are nematodes (roundworms).[13]

The coastal taipan is oviparous.[14] Studies of museum specimens have found oviducal eggs in females from late August to mid-November, and gravid females have been observed basking in the ‘windrows’ of cane fields from August to September. Mating in captive coastal taipans also appears to peak in late winter/early spring (although they can be encouraged to breed almost all year round). Behaviour presumed to be male combat has been reported in wild (unsexed) taipans. Combat usually involves two males entwining their bodies and ‘wrestling’ to push down the other’s head and neck. How a ‘winner’ is determined remains unclear, however by defeating and driving away competitors the successful male presumably gains greater access to any receptive females in the area.[8]

Courtship observed in captive coastal taipans appears to follow the basic pattern seen in many other snake species. Upon encountering a receptive female the male becomes highly excited and moves up and along the body of the female, continually tongue-flicking and rubbing his chin against her. In captivity, copulation has lasted as long as three hours and 20 minutes.

Two to three months after mating the female will lay between 3 and 21 soft-shelled eggs (average of 11), usually in a log hollow, under tree roots or in cavities in the ground. Depending on the incubation temperature, the eggs hatch between two and three months after being laid. The emerging young measure around 46 cm (18.11 in) and are completely independent from birth.[13]

This snake is one of the worlds most venomous land snakes. The subcutaneous LD50 value of this species is 0.106 mg/kg according to Dr. Bryan Grieg Fry of the University of Queensland,[2] and 0.12 mg/kg according to Engelmann and Obst (1981), and the average venom yield per bite is 120 mg,[15] with a maximum yield of 400 mg.[2] When the coastal taipan strikes, it injects a large amount of highly toxic venom deep into the flesh, and similar to the black mamba, studies have shown they are capable of injecting the same amount of venom in a second or third bite. Its venom contains primarily taicatoxin, a highly potent neurotoxin known to cause hemolytic and coagulopathic reactions.[16] In case of severe envenomation, death can occur as early as 30 minutes after being bitten, but average death time after a bite is around 90 minutes and it may even take up to 6-8 hours, depending on the nature of the bite. Although more venomous than the black mamba, the venom of this species is not nearly as rapid-acting, so death time is delayed compared to the black mamba.[16] The coastal taipan has the second-highest mortality rate among all venomous snakes, after only the black mamba. Without treatment, the mortality rate is generally above 90%.[17][18]