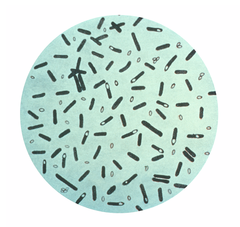 Clostridium botulinum is a Gram-positive rod-shaped bacteria. Clostridium botulinum is in the family categorized as Gram-positive bacilli. This bacteria produces a neurotoxin which leads to paralysis. Clostridium botulinum are based on seven different distinct types. They are labeled A through G and further grouped into four distinct sections. Out of the four groups, group one and two tend to have the highest occurrence rate.2 Group one lives in an ideal temperature of 37 degrees Celsius and once the temperature becomes hotter spores begin to form. Group two grows optimally in a lower temperature around 30 degrees Celsius and grows spores once the temperature drops. Group three is usually found to pathogenic amongst animals, excluding humans. Group four are being re-evaluated to see if they truly cause any type of disease. Both group three and four have favorable conditions at 40 degrees Celsius.3 This bacteria,Cl. botulinum is an obligate anaerobic bacteria, that produces endospores, and releases a superoxide dismutase which allows the bacteria to survive in unfavorable conditions. Cl. botulinum is normally grown in soil and water environments.

The genome of Clostridum botulinum was sequenced due to the many unique abilities that this bacteria retains. This bacteria produces a toxin called Botulinum toxin which forms the foodborne illness, Botulism.[1] Scientists have illustrated many studies regarding the four different groups of Cl. botulinum. The size of this bacteria is relatively large. This feature is thought to be large due to the ability to form spores and the skill to produce toxins. Genomic analysis by pulse-field gel electrophoresis revealed genes encoding neurotoxin, hemagglutinin A, and genes for a temperate phage, and various transposon Tn916 sites.

"Clostridium botulinum" is a single rod stranded Gram-positive anaerobic bacteria. When the proper environment is not met this bacteria lies in its latent stage. The ideal environment is moist, with very little oxygen in a mesophilic climate. An example, of this type of environment is in soil and marine environments. Considering a favorable place of habitat for "Clostridium botulinum" is soil, it allows the idea that this bacteria can pollute the surrounding soil and effect many crops that are grown. Each categorized group is best grown in different set temperatures. Clostridium botulinum is spore forming, and can resist harsh environments due to the superoxide dismutase. Additionally, due to the formation of spores the bacteria is protected against harsh conditions. After the formation of spores, the spores will release toxins leading to the food borne illness. 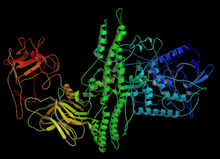 Clostridium botulinum is a bacteria that has an incomparable effect on the environment. They are able to interrupt the ecosystem by invading and contaminating many foods eaten, however it can greatly improve someone’s life.

Generally, Clostridium botulinum has a negative consequence on the environment. There are seven types of Clostridium botulinum, however type 5-E, is the type that causes spores and eventually causes a release of toxins. “In order for proliferation to occur, the spores need to be present in non-halophilic salinity and anaerobic conditions.” The endospore forming group is type E, which is found in soil and can affect plants and other habitats, such as beaches.[2] "Clostridium botulinum" was found on 5 out of every 12 beaches in Alaska and was found in the gills of many fish, such as salmon. Furthermore, in the Applied and Environmental Microbiology Journal, 14 out of 47 farmlands contained the bacteria Clostridium botulinum.[3] This bacteria effects the nervous system, by effecting the release of the neurotransmitter acetylcholine. Without acetylcholine muscles will not contract and paralysis can occur.[4] The spores can effect almost every food. When infected with "Clostridium botulinum" common symptoms include, nausea, vomiting, weakness, double vision, and difficulty speaking and swallowing.[5]

On the other hand, "Clostridium botulinum" has some positive attributes. The toxin from "Clostridium botulinum" is injected intramusculary, commonly known as botox. Botox can treat nervous muscle related twitches, as well as sporadic muscle tensions. The blepharospasm is an involuntary muscle in the eye that forces the eyelid closed. On a personal level, Botox can also treat facial wrinkles.[6]

Botulinum toxin is injected intramuscularly, never entering the blood stream. A full physical exam and many comprehensive questions must be asked before the toxin is injected. The only known side effect is muscle weakness.

Clostridium botulinum is a bacteria that releases a toxin leading to Botulism. Out of the seven different types of bacteria, types A, B and E are pathogenic in human. Groups one and two(A and B) are dangerous in humans. When infected with Clostridium botulinum, the toxin will automatically bind to the presynaptic nerve terminal in the neuromuscular junction. Type A binds to the SNAP-25 protein. The SNAP-25 protein is responsible for the release of neurotransmitters. The Botulinum toxin prevents acetylcholine from binding to the presynaptic nerve terminal which relaxes the muscles and prevents it from contracting.[7] The toxins are further digested trough the gastrointestinal tract and are denatured causing stomach problems, such as constipation.[8] 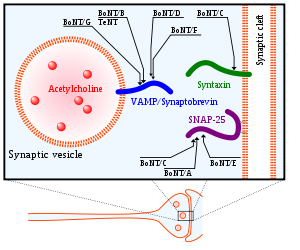 The Pathology of the Botulinum Toxin

Any individual can come in contact with Clostridium botulinum, either willingly or unfortunately. Not including being injected with the toxin, there are three ways to come in contact with this toxin: aerosol spread during warfare, wound infection and food borne illness.[9] Transmission can occur with the spread of aerosol during a time of warfare as a biological toxin. Additionally, during trauma, Clostridium botulinum can be spread through wound infections. Lastly, ingesting the toxin would be considered a food borne illness. There are a few ways of getting, Cl. Botulinum as a food borne illness. These ways include infant botulism (ingesting honey), improperly preserved food cans, crops from polluted soil, meats, vegetables and fruits grown in contaminated places.[10]

Clostridium botulinum strand A is being used now to treat both muscle problems, as well as lessening wrinkles. In 1949, Dr.Burgen’s discovered that botulinum blocks neuromuscular transmissions. The following year it was found that when injected into a nerve ending it will block the acetylcholine from the neuromuscular junction. In the next 30 years Dr. Alan B. Scott, of Smith-Kettlewell Eye Research Institute, used botulinum for the first time in humans to treat strabismus, which is a deviation from normal vision. Within the next ten years, botulinum was used for many other eye and facial conditions. These conditions are strabismus blepharospasm, cervical dystonia and hemifacial spasm. In the year 2001 botulinum was used for excessive sweating, axillary hyperhidrosis.[11] In addition, to medical treatments it also was linked to reducing wrinkles and eyebrow lines in 2001. Although, in the United States it has not been approved, botulinum is used to treat chronic muscle pain, in Europe. Lastly, current research is being performed to see if any other strand of botulinum can be used to help or treat various conditions besides category A.[12]

Botulinum toxin works inside the presynaptic terminal to block the neurotransmitter acetylcholine from being released. The toxin works by binding to the neuronal membrane receptor and it penetrates the endosome membrane. After the toxin is within the synaptic region, botulinum A and E separate connecting to a neuronal protein, SNAP-25. This study measured the effect on the toxin on this neuronal protein. This study showed that the uptake botulinum A and E showed depolarization of potassium when calcium was present. It also showed that the translocation of botulinum A from the acidic endosomal compartment is slower compared with botulinum E. In conclusion, this study demonstrates that the uptake of both strands of botulinum are enhanced with synaptic activity and that the translocation of the toxin catalytic moiety into the cytosol occurs at different rates for these two serotypes.[13]

Botulinum toxin has been used to paralyze the muscles in the face and to get rid wrinkles. In addition, it was use to decrease dark extensive eyebrow lines. The purpose of this study is to make facial pore size smaller and to reduce the fatty secretion from the face. This study was performed to review the safety of using the intradermal botulinum toxin A. The study was conducted with 20 clients. Out of the 20 clients, 17 of them reported a satisfied improvement with sebum production and a decrease in pore size. The procedure was uncomplicated. The results concluded that the intradermal botulinum toxin may help in reducing sebum output.[14]

Infant botulism is the result of giving honey to a newborn, under twelve months of age. Botulism is caused by the toxin produced by "Clostridium botulinum". From the bacteria "Clostridium botulinum" a toxin is produced and stops the connection of the acetylcholine in neuromuscular junctions. The toxin that is released binds to the peripheral presynaptic cholinergic membranes, producing a life-threatening, paralytic illness. This incident was reported, but with urgent medical help the outcome was very satisfactory.[15]