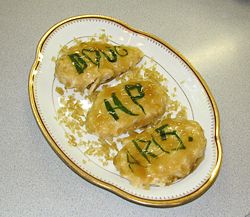 Chaud-froid (literally "hot-cold" in French) has two separate but closely linked culinary meanings. Originally it meant a dish (meat, poultry, eggs, fish) that had been cooked, then cooled and coated with a thick sauce that would, when refrigerated, gel into an attractive coating, in the same way that aspic coats a dish. For many years, since its apparent introduction in 1759,[1] this was the primary meaning of the term. In the 20th century, however, at least in English usage, the term has frequently come to mean the jellied sauce itself.

The sauce, although it can be flavored and colored in various ways, is now generally understood to be white and is used primarily to decorate and flavor elegant, and sometimes very elaborate, French dishes such as cold chicken breasts or entire cold chickens. The classical preparation of it, as elaborated by 19th-century chefs such as Auguste Escoffier for such dishes as Suprêmes de Volaille Jeannette, began with a white velouté sauce, to which was added cream, for the color, and very thick jellied aspic, for the thickening. Strained and seasoned, frequently with tarragon, it would then be applied in one smooth layer after another onto cold dishes such as eggs and chicken until the final dish was smooth, white, and glossy. Sliced black truffles or other ingredients were frequently used to decorate it. As a final embellishment, another smooth layer of tarragon-flavored jellied aspic might then be spread over the underlying chaud-froid.

A somewhat simpler method, as propounded by another famous chef, Louis Diat, is to add liquified gelatin to the velouté sauce and stir it with heavy cream.[2] The American cookbook writer Julia Child prepares a somewhat lighter version, calling it Chaud-froid, Blanche Neige (Snow White's Chaud-froid). This consists of chicken aspic to which cream is added and the mixture is then reduced. There is no flour in this recipe, as in the classical preparation.[3] A nearly similar cold coating used in the same way is mayonnaise chaud-froid, in which mayonnaise is given a gelatinous quality by the addition of liquified gelatin.[4]

After dismissing the notion that a member of King Louis XV's establishment named Chaufroix gave his name to the dish, the Larousse Gastronomique attributes its creation to the cooks of the Maréchal de Luxembourg at the Château Montmorency in 1759. Having arranged for an enormous banquet for many guests, the Marshall was then called away at the last moment by the King's Council. When he returned much later that evening he demanded to be given a single dish; he was presented with a fricassée of cold chicken, on which the sauce had hardened. He loved it, and renamed it from what the cooks called it, refroidi (chilled or cooled), to chaud-froid.[5]

Many of the early chaud-froids were presented in extremely elaborate fashion on three-tiered plinths or towers made of bread or breadcrumbs bound together that would hold a pyramid of pieces of fowl or game covered with carefully decorated jellied sauces. Today this manner of serving them has generally vanished.[6]