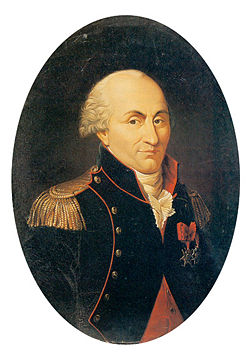 (PD) Image: Académie des Sciences
Portrait of Charles-Augustin de Coulomb.
Charles-Augustin de Coulomb (Angoulême June 14, 1736 – Paris August 23, 1806) was a French physicist. He is known for Coulomb's law, which is an inverse-square law for electrostatic charges very similar to Newton's gravitational law for masses. The SI unit of charge, the coulomb, is named after Coulomb.

Three years after Charles-Augustin graduated from the military engineering school École du Génie at Mézières in 1761, he was posted as an engineer-officer in the French colony Martinique. He stayed there nine years rebuilding forts that were destroyed during the Seven Years' War and returned to France in 1773 when he was thirty-six years old and in poor health.

After his return Coulomb spent his spare time on physics research. He shared the 1777 Grand Prix of the Académie des Sciences for his study of variations in the magnetic compass. This brought him into the Académie in 1781 and to the invention of the torsion balance. He used this extremely sensitive instrument in electric and magnetic investigations, culminating in the discovery (1785) of the law called after him. He also established the inverse square law of attraction and repulsion of unlike and like magnetic poles, which became the basis for the mathematical theory of magnetic forces developed by Siméon-Denis Poisson. He also did research on friction of machinery, on windmills, and on the elasticity of metal and silk fibres.

Upon the outbreak of the French Revolution (1789), he retired to a small estate at Blois and devoted himself to scientific research. Napoleon appointed him inspector general of public instruction in 1802 and four years later he died in Paris.