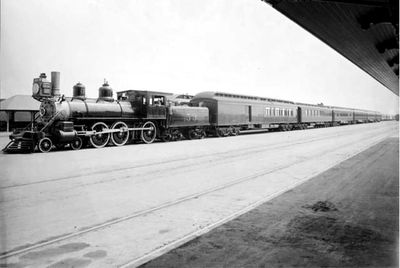 (PD) Photo: William Henry Jackson
A view of the Atchison, Topeka and Santa Fe Railway's California Limited in Los Angeles, California shows engine No. 53 at the La Grande Station, circa 1899.

(PD) Image: Atchison, Topeka and Santa Fe Railway
"Drumhead" logos such as these often adorned the ends of observation cars on the California Limited.

The California Limited was one of the named passenger trains of the Atchison, Topeka and Santa Fe Railway (AT&SF). It was assigned train Nos. 3 & 4, and its route ran from Chicago, Illinois to Los Angeles, California. Operating seven sections of the Limited was common, and during peak travel periods as many as 23 westbound and 22 eastbound sections departed in a single day. The line was conceived by company president Allen Manvel as a means to "...signify completion of the basic [Santa Fe] system..." Manvel felt he could attract business and enhance the prestige of the railroad by establishing daily, first-class service from Chicago to the West Coast. The California Limited, billed as the "Finest Train West of Chicago," made its first run on November 27, 1892, with five separate trainsets making continuous round trips on a 2½-day schedule (each way). The Limited was the first of Santa Fe's name trains to feature Fred Harvey Company meal service en route. The later trains also offered all of the amenities of the day including air conditioning, an onboard barber, beautician, steam-operated clothing press, even a shower-bath. The Limited was also the first train in the Santa Fe system to have its observation cars fitted with illuminated "drumhead" signs which bore the train's name juxtaposed over the company's logo.

The California Limited was permanently removed from service on June 15, 1954, giving it the distinction of having had the longest tenure of any train making the Chicago-Los Angeles run within the Santa Fe system. 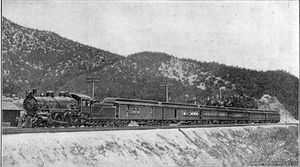 (PD) Photo: Helen Elliot Bandini
The California Limited pauses after climbing to the summit of Cajon Pass in 1908. 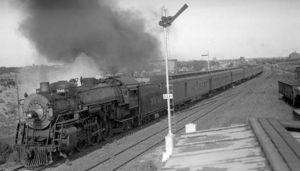 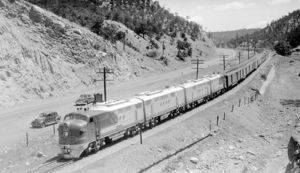 A wide variety of steam- and diesel-powered locomotives served the California Limited over the course of its lifetime.

In 1892, the rolling stock delivered for the California Limited consisted of all heavyweight cars built by the Pullman-Standard. The equipment used on each train was as follows:

Though the cars would in time change to the all-steel heavyweight variety, followed eventually by stainless-steel lightweight construction, for years the consist of the California Limited remained at only six cars per section.