Bubble Bobble is a platform video game developed by Taito and published by both Taito and Romstar. It was originally released in 1986 as an arcade machine, but has since been ported to a large number of systems.

Two humans, Bub and Bob, have been transformed into bubble-breathing dinosaurs by Baron von Blubba. The Baron has also captured their two girlfriends, and the two dinosaurs must battle their way through 100 levels of monsters in order to finally rescue them.

The game consists of 100 levels, each of which consists of a single screen. On this screen is a number of platforms and a number of creatures. Players take control of a dinosaur which can move left and right around the level, and can also jump. The dinosaur starts each level in the bottom-left corner of the screen, however in two-player mode the second player begins in the bottom-right corner. Players are able to jump through platforms in an upwards direction in order to move higher up within the level, however they must fall in order to move down the screen. At the bottom of most screens are gaps, and falling through these gaps will take the player to the top of the screen. The creatures also move around the screen following similar rules, however only some of them can jump. Should the player touch a creature at any point then they will die, lose a life and be returned to their starting position.

Once bubbles have reached the end of their firing range they enter a predefined movement path which varies from level to level. All bubbles follow this path, whether they are full or empty. Also on some levels bubbles will appear from the edges of the screen, and these also follow these paths. After existing for a certain amount of time a bubble will pop on its own, and should it contain a creature the creature will be released however it will now be 'angry'. Angry creatures can be distinguished from other creatures by their red colour, and they move at approximately double the speed of all other creatures. Once there is only one creature left, this creature also becomes angry.

Bubbles can be popped by the player in a number of ways. The dinosaurs have spikes on their backs, and if a bubble floats into these spikes the bubble will pop. The player can also jump into the bubble in such a way as the spikes touch it, or they can jump on top of the bubble in order to pop it. Should the player move into a bubble in a forwards motion they will push the bubble, and pushing a bubble into a wall is another way to pop a bubble. Also, if any other bubbles are touching a bubble that is popped, they will also pop in a chain-reaction.

Each level has two time limits. Once the first time limit has expired the words "Hurry Up!" will flash onto the screen, the music will change and all of the remaining creatures become angry. Once the second time limit has expired a sound effect will appear and one Baron von Blubba creature will appear for each player that is alive. These creatures move in a precise, predictable fashion that chases the player and cannot be killed. When a player dies their Baron von Blubba will disappear, all of the creatures will stop being angry, and the time limits will restart.

At various points in the game items will appear throughout the level. There are two types of items. The first, known as 'points items' are simply there to give points. Most of these take the form of food, however some higher-value items take the form of diamonds or jewellery. Also, when a creature is killed it will turn into a points item.

The other types of items, 'special items', are power-ups which can enhance the abilities of the dinosaurs or cause things to happen. For example the yellow sweet increases the speed at which the dinosaurs can shoot bubbles, the purple lantern causes an explosion killing all of the creatures on the screen, and the blue candy cane causes a giant blue lolly to appear at the end of the level for massive points.

The appearance of these special items appears at first to be random, however they all have a very specific reason for their appearance. The game keeps a number of counters running throughout the game, and when these counters reach a certain point they reset and cause a specific item to appear on the next level. For example after a dinosaur jumps 51 times the yellow sweet appears on the next level. These counters are not reset when the game begins or ends, only when the machine is turned off. Therefore it is not uncommon for a very high counter to 'tick over' during the first level.

As well as items, there are also special bubbles that float into some levels. Each of these has a special function: 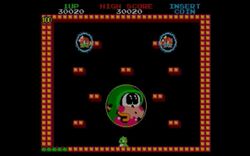 © Screenshot: Taito
After hitting the Super Drunk with a large number of lightning bolts he enters a bubble and can be popped.

Once the player reaches level 100 they must face the final boss - the Super Drunk. This creature is unusual in several ways, most obviously in that it is many times larger than a normal creature. It moves around the screen diagonally, and bounces off the four edges of the screen when it hits them. It frequently shoots an arc of several bottles that must be avoided. The Super Drunk cannot be placed in a bubble via normal means, however the means to killing it is provided. Two potions are found in the room and these potions make the dinosaurs breath lightning bubbles. By making these bubbles and popping them it is possible to hit the Super Drunk with a lightning bolt. After a large number of hits the Super Drunk will become angry and speed up, and then after another large number of hits it will contain itself in a bubble. The player then simply has to pop this bubble in order to complete the game.

However, there are actually three endings and only one of them classes as the true ending. The first, and easiest to see, is the bad ending. This occurs when the player completes the game in one player mode. The bubble containing the girlfriend of the dinosaur that the player is playing bursts and she is released, and the dinosaur turns back into a human as the pair reunite. However the other girlfriend is left in a bubble. The game informs the player that it is not a true ending, and that they should never forget their friend. The player is then moved back several levels and can continue to play the game. 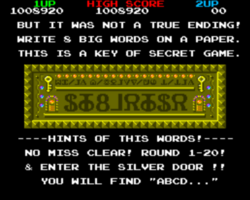 © Screenshot: Taito
After the credits of a 'happy ending' the player is informed that this is not a true ending.

The second ending, and almost as easy to see, is the happy ending. This occurs when the game is completed in two player mode. Both of the bubbles containing the girlfriends burst and both dinosaurs turn back into humans as the couples are reunited. The 'happy end' screen is displayed and the player is awarded 1,000,000 points. The text that follows tells the player that they have found the most important magic in the world - love and friendship! At this point the credits start to scroll, and the player believes that they have won the game. It isn't until the credits have finished that another screen is displayed and the truth is revealed.

The next screen informs the player that the ending they just witnessed was not a true ending. It also gives the player some strange symbols and a clue as to how to access the true ending. The clue says "No miss clear! Round 1-20! & Enter the silver door!!". This means that the player must reach level twenty without dying. Should they manage this they will find a silver door which when touched will move the player into a bonus level known as the treasure room. This treasure room contains a lot of diamonds which the player can collect for points, but also shows a strange inscription in the same weird symbols that were seen in the 'happy ending'.

© Screenshot: Taito
The treasure room is accessible only if the player reaches the required level without dying.

The top line of this inscription is the key to understanding the symbols. The symbols are a simple cypher, and the top line shows, in order, the symbols that represent the letters A to Z. Using this key it is possible to decrypt the message in the treasure room. It reads "If you want to become the old figure, use the power of your friendship, and fight with me!" meaning that to complete the game you must defeat the Super Drunk. Should the player reach level 30 without dying there is another treasure room which has another message using the same key. This message reads "I enclose these magical medicine here, because those are my worst fears...." which is a reference to the lightning potions that are on level 100 and used to defeat the Super Drunk. As long as the player still does not die, a final treasure room appears on level 40 with another message that reads "If you want to get back your love of truth you must help each other until the last...." which refers to the fact that the game must be completed with two players in order to avoid the 'bad ending'.

The most important thing about the treasure rooms is the cypher key. As this does not change between treasure rooms, only the level twenty treasure room needs to be accessed in order to discover it - and of course it is always possible to obtain the key from a friend or some other resource. The key can then be used to decrypt the inscription shown at the end of the 'happy ending'. The inscription gives the player a cheat to enter on the title screen of the game. Should they enter this the name of the game on the title screen will change to 'Super Bubble Bobble'. The player can then start the game in super mode. The levels in super mode are the same, however the creatures on each level are changed. The player must then complete the 100 levels and defeat the end boss, again in two-player mode, in order to finally see the true ending.

When the bubble containing the defeated Super Drunk is popped in Super Bubble Bobble mode the creature does not vanish but instead changes into a giant dinosaur which falls to the ground. This dinosaur then changes into two giant humans wearing jumpers that say "mama" and "papa". The girlfriends are also released from their bubbles and are reunited with their partners, who change into humans also. The game is finally completed and the true ending is displayed.