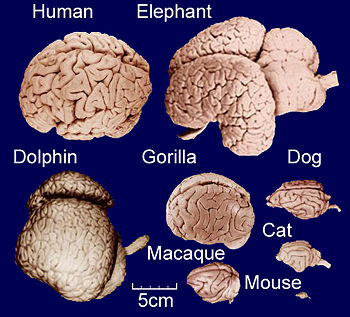 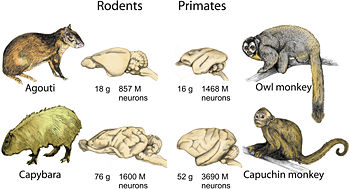 Comparison of rodent and primate brains (from Herculano-Houzel, 2009). Brain size is not a reliable indicator of number of neurons across orders. Because of the different cellular scaling rules that apply to rodent and primate brains, primates always concentrate larger numbers of neurons in the brain than rodents of a similar, or even larger, brain size. Data from Herculano-Houzel et al. (2006, 2007). Illustration by Lorena Kaz.

Since the brain has enlarged considerably during hominid evolution, brain size is a central term in many discussions related to cognitive evolution, intelligence and a number of brain disorders, especially microcephaly. To compare different brains, several indicators of brain size have been used. These include absolute brain size, relative brain size (normalized by body size or weight), and the encephalization coefficient.

A number of parameters have been found to be involved in the determination of brain size. These include the genes microcephalin (MCPH1) and ASPM (MCPH5; for overview, see Stern and Woods, 2006 and Tang 2006; contradictory evidence is presented in Ali & Meier, 2008), habitat density (at least in bats, cf. Safi et al., 2005), and pelvic size in human females (cf. Ridley 1995) as a limiting factor.

Further variables interact with brain size but cause and effect in these relationships have not yet been clearly identified. This is the case with migratory distance in birds (Sol et al., 2010), the maximum rate of population increase (Isler & Van Schaik, 2009), the basal metabolic rate (Isler & van Schaik, 2006a), the flight musculature (at least in birds, cf. Isler & van Schaik, 2006b), the wing area (at least in bats, cf. Safi et al., 2005), and some cognitive traits like kleptoparasitism (Morand-Ferron et al., 2007).